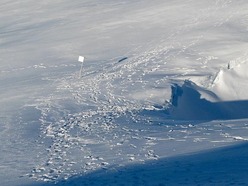 The aluminium marker post at the head of Number Four Gully was installed in 1954 by Dr Donald Duff. Ever since, it has been a welcome sight for climbers searching for the top of Number Four Gully in poor visibility. The post was originally straight, but has been bent over the years by parties using it as an abseil anchor.
Photo by Simon Richardson

Ben Nevis and the future of Number Four Gully marker

The aluminium marker at the top of Number Four Gully on Ben Nevis is being reviewed by the land owners, the John Muir Trust.

Simon Richardson of Scottish Winter has reported that, for some inexplicable reason, the marker post at the head of Number Four Gully on Ben Nevis was removed and flung down the gully. On November 14 it was recovered and replaced by Alan Halewood and as a consequence the John Muir Trust who own the south side of Ben Nevis is now inviting comments from the general public on whether the post should be retained.

The aluminium marker post is located at the head of Number Four Gully and was installed in 1954 by Dr Donald Duff, a keen climber and surgeon working at Belford Hospital in Fort William. As Richardson now points out, even in complete whiteout conditions the the marker clearly indicates the start of the most popular descent route as the the gully itself is considered very safe in the majority of conditions.

The plateau can be a confusing place in poor visibility - even to the most experienced of Scottish mountaineers – and without the marker in place navigation will prove difficult and extremely dangerous, as nearby Number Three gully is a completely different proposition.

All those who have found the marker useful in the past are invited to send comments to www.jmt.org/ben-nevis-summit-consultation