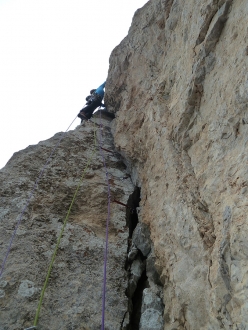 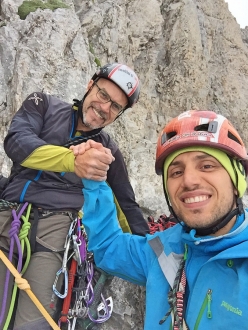 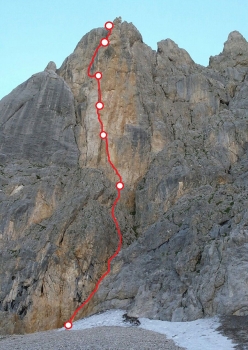 In the Brenta Dolomites Andrea Simonini and Gianluca Beliamoli have made the first ascent of 'Bastava un Piumino' (180m, 6c), a new multi-pitch climb on a tower they have named Pilastro Canino, next to Cima d'Agola in Val d'Ambiez. Simonini provides the report.

It all began during the two days (24/25 June) I was trying to establish a superb new route up Cima Agola with Tommaso Marchesini and Nicola Zorzi.

While resting, between one fall and the other, I cast a glance circa 500m below me, to an incredible crack and I wondered... who knows what route climbs that line, it must be a blast! I returned to the task at hand and continued to skyhook my way up crap rock, gaining a good forty meters in the next two days. It’s going to be a tough project, but that’s another story!

Back home I examined the guidebook and tried to figure out which route tackles that crack and… it was virgin! It seemed impossible that a line as obvious as this one had escaped the eyes of so many great mountaineers who have ventured up into Val Ambiez over the years.

I immediately called by climbing partner Gianluca Beliamoli and suggested we take a look, to see whether "our" line was indeed untouched. Gian obviously accepted immediately and although we were convinced it had already been climbed, we set off with all the gear needed to establish a new route.

We relied on some photos taken with my mobile phone (horrible) and we reached the base of the pillar in a brace of shakes. We carefully analysed its lines of weaknesses and both hoped we were the first to have sensed its potential. We tied in and I set off. The first pitch was easy and after 50m I reached the base of the crack that showed the way upwards. I hadn’t stumbled across any pegs and while setting up the belay I looked around, on "pegdetector" alert, but failed to see anything. Gian followed and we began to realise that indeed we’d be the first to lay our hands on this masterpiece.

From here a series of cracks lead upwards that are absolutely superb. Not that the first pitch is poor, by no means, but the crack above dictates that climbing and accepts friends like there’s no tomorrow. We climbed two two beautiful pitches and reached the base of an off-width.

We’d geared up with a number of friends up to #5 BD and, 4 meters above the belay, I realised that this "purple number 5" was already doing its dirty work. So now what?! The crack continueed too large to take our friends. Perhaps it would accept a #6 (which we didn’t have), but then again, who owns a #6?! And what if it didn’t take a #6?!

In the end I rested on the friend and we decided to place 3 bolts in this Californian-style, run-out section of the crack. I placed another #5 higher up and reached the belay. It was still early, the whole day still lay ahead of us, yet it was bitterly cold. We were at 2800m and, moreover, the wind had picked up, it must have been only about 5 or 6 degrees.

Gian opened his rucksack to look for his down jacket but realised he’d forgotten it in the car. I told him to use mine as I was still warm from the pitch I’d just established, but my water bottle had leaked, making my jacket unusable. It was too cold to continue with just a light fleece and a windbreaker. We descended.

We are delighted with what we’d climbed, with the beauty and logical nature of the route, but at the same time we regretted being back on the ground as we’d liked to have established it in a single day… better luck next time! Hence the name of the route Bastava un Piumino - all that was needed was a down jacket.

We returned a week later, freezing level was forecast at 4200m and the climbing was godsend. We freed the lower pitches all the way to the off-width and then Gian added another two beautiful pitches to reach the top of the virgin pillar we chose to call "Pillar Canino" due to its pointed shape.

It's a wonderful route that follows an incredible, logical line, up perfect cracks all the way to the summit, making you feel in tune with the surrounding environment!

Another great adventure. Thanks Gian ... but... "I’m not going to return by bike again!" A heartfelt thanks also to our friends at the legendary Agostini refuge.

Thanks: Wild Climb, Patagonia and ProAction.