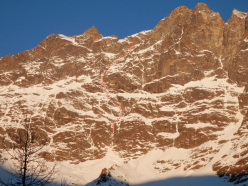 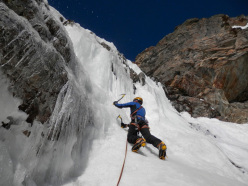 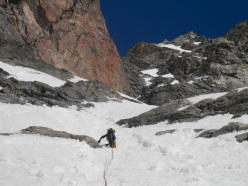 On 14/03/2014 François Cazzanelli and Roberto Ferraris made the first ascent of Banana sprint, a 670m mixed line dedicated to Simona Hosquet up the SE Face of Grandes Murailles (Pennine Alps). The summit was reached by following the the Normal route up Punta Sella, first climbed in 1877 by G. Corona, J.B. Aymonod and C. Carrel, and then finishing up a new variant.

There are some lines that you always see, but have never been climbed before. "Banana sprint" is one of these. It was climbed on 14/03/2014 by the mountain guides Francois Cazzanelli and Roberto Ferraris, belonging to the Courmayeur G.M.A.M and the Cervinia S.A.G.F.

It doesn't want to be an important route, only a beautiful climb in memory of a colleague and friend who died recently in an avalanche: Simona Hosquet, mountain guide and military mountaineering instructor.

The route is an ice and mixed line up the SE Face of Grandes Murailles that weaves it's way logically up between Becca di Guin and P.ta Sella ai Jumeaux. 1300m long with an 850m vertical height gain, it is reached after a 900m approach (ski mountaineering or snowshoes).

Only the first half is new, while the upper section follows the summer line first climbed on 12 August 1877 by G. Corona, J.B. Aymonod and C. Carrel, before exiting onto the ridge with a mixed variant.

The result is a grade V/4 ice gully, with ice difficulties up to WI 3+ and some mixed sections, the most demanding of which are right at the end, close to the col IGM 3742m.