► News ► Alpinism ► Avalanche on Nanga Parbat: two Polish alpinists injured and ready to be evacuated from BC
Versione italiana 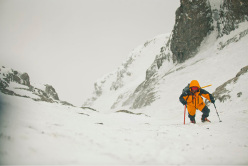 During the Polish attempt of the first winter ascent of Nanga Parbat
Photo by Michal Obrycki / www.michalobrycki.com 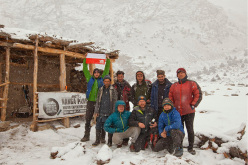 Nanga Parbat in winter: the Polish expedition "Justice for all"
Photo by Michal Obrycki / www.michalobrycki.com

PORTFOLIO / gallery Portfolio: Avalanche on Nanga Parbat: two Polish alpinists injured and ready to be evacuated from BC

Avalanche on Nanga Parbat: two Polish alpinists injured and ready to be evacuated from BC

Near miss on Nanga Parbat's Rupal Face: on Saturday afternoon, at circa 5000m, Polish alpinists Pawel Dunaj and Michal Obrycki were hit by an avalanche during their latest attempt to climb Nanga Parbat in winter.

According to preliminary reports, the two climbers set out on Saturday morning to free the ropes and tents buried deep in the snow when, in the afternoon, an avalanche struck and swept them for about 500m down the mountain.

After having raised the alarm via radio a rescue operation was lauched immediately by the other two Poles, Tomek Mackiewicz and Jacek Telerde who together with the two Pakistani cooks and a dozen villagers managed to transport the two injured mountaineers back down to Base Camp.

Both Dunaj and Obrycki were injured by the avalanche (broken ribs and arm for Pawel Dunaj, broken nose and injured leg for Michal Obrycki). What is certain is that they both need to be evacuated by helicopter and taken to hospital as quickly as possible.

After having overcome a first bureaucratic hurdle, connected it seems to the insurance a deposit which expeditions usually leave in cases like these, all are now waiting for the mountain conditions to improve so enable the helicopter to take off and rescue the two injured alpinists.

For more information: simonemoro.gazzetta.it and the expedition's official website www.nangadream.blogspot.com