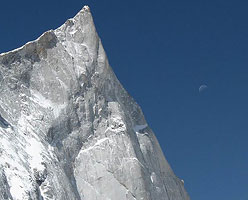 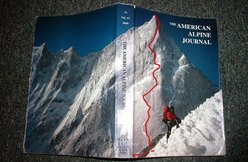 Arwa Tower - the picture that set it all in motion - Mick Fowler's front cover of the 2000 American Alpine Journal.
Photo by Alpinist.com 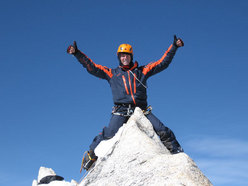 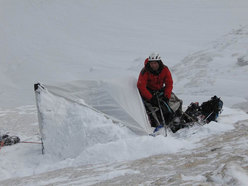 On 7 June 2007 Stephan Siegrist, Thomas Senf and Denis Burdet made the coveted first ascent of the North East Face of the stunning Arwa Tower (6352m), Garhwal Himalaya, India, naming their route Lightning Strike and grading it VI M5 5.9 A3 (in demanding mixed terrain) 1000m. The stunning Arwa Tower shot to fame in 1999 when it was first ascended by that man again, Mick Fowler and Steve Sustad.

The three Swissmen travelled together with Anita Kolar and Ines Papert who had their sights set on the West Face, and the five established Base Camp at 4350m on 05.05.07. During the first night the expedition suffered a first setback: Anita Kolar developed pulmonary oedema and all efforts were focused on transporting Anita to a lower altitude.

The trio then set to work immediately equipping the steep snow slopes which led to the ABC on 5250 meter base of the route. Fighting hard against continual snowfall, they wisely abandoned a first attempt but aided by the light of the full moon in the night from 31/05/07 they set off once again to climb the 1000m structureless granite face and after 7 days of hard climbing reached the summit, exhausted but overjoyed. The same day they roped down half of the great wall and needed a further day to return to the safety of Base Camp, where the porters were already waiting to get the team back to civilisation. Talk about just in time!

Siegrist rates this ascent as follows: "the expedition unfolded in the same vein as it began (Anita's pulmonary oedema)... It was marked by ups and downs, by positive events and setbacks. That's why we believe the name "Lightning Strike" fit the route perfectly, with its positive and negative charges - and the line resembled a rockfall, which struck like a lightening up through the enormous wall!

This wall was almost completely without cracks and when they were there, they were offwidths and we found this terrain to be extremely demanding. Bird-peaks became our most important piece of equipment. The rock is weathered and even with Cliffs there is little to hang on to on the rounded features. This meant that we climbed like snails - the aid climbing required an eerie amount of time - and this was aggravated by the fact that the wall was covered with snow. We even had to search for features with a snow shovel beneath the large "lightning" thunderbolt. But objectively the route was fairly safe, apart from the fact the both Denis and Thomas were slightly injured due to icefall.

If you study the photographs then it feels as if the terrain eases up after the first half! Unfortunately this wasn't the case - the difficulties ended only on the last two pitches.
Every night when we went to sleep in our Portaledges we thought to ourselves "the summit isn't far" - but it was - extremely far!

We lived through a rollercoaster ride of emotions and with the constant thought that somehow we'd manage to pull it off. For me personally it was a great satisfaction to achieve something important after such a long lay off due to injury, and it showed me once again how important and decisive a good team is."


Stephan Siegrist CV - 1972
UIAA Mountain Guide, one of Switzerland's foremost all-rounders, has climbed up to 8b but recently has concentrated efforts on large mountain routes. Highlights include the following: