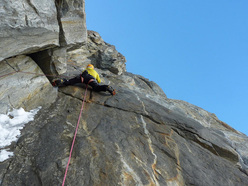 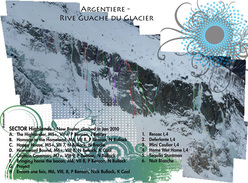 A handful of British climbers have established a series of new mixed routes at the Rive Gauche, Chamonix.

Janaury and February have resulted in a flurry of short new mixed routes at the Rive Gauche above the Argentiere Glacier, Chamonix. The driving force behind this recent development is Nick Bullock, who teamed up with Pete Benson, Kenton Cool, Neil Brodie and Jon Bracey to climb seven short routes to the left of the famous Nuit Blanche, first ascended by Steve Haston and Patrick Naudin in 1994.

On his blog Kenton Cool recounts how the new routing came about: "We hoped to do a short route called Home Wet Home, first climbed years ago by Thierry Renault. We set the abseil rope up and I disappeared over the edge first, by the time I reached the end of the rope it was clear that we weere in the wrong place, phoning Nick at the top I stated this, adding that the climb above my head looked loose, hard and dangerous. What I had forgotten is that is exactly what Bullock likes in his climbing. Some three hours later we had a new route under our belts... Homeward Bound is probably not going to become a classic but it opened the flood gates of new routes on the Rive Gauche."

Nick Bullock explained the new routing at the "Sector Highlands" as they have now named the area: "Climbing is a great activity. It is different things for different people. There will be many that say these routes are pointless, small and insignificant lines amongst the mountains and not worth bothering with. Well that’s fine, don’t do them. But for my mates and me these climbs were great adventurous days out when the mountains were out of bounds. The type of climbing was a real test of nerve. Pushing on into no-mans-land with no idea what protection was available and what type of climbing would come is unbelievably rewarding no matter where it is. The climbs will never be great mountain classics and we didn’t climb them to spray about what great climbers we are, but having had some really fantastic days out we wanted to share the climbs."