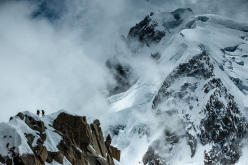 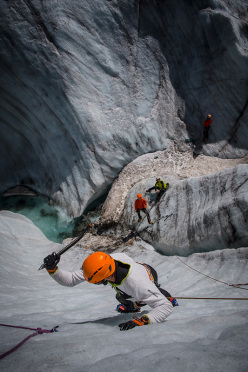 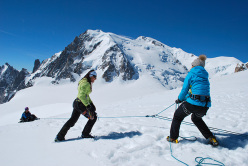 Arc'teryx Alpine Arc'ademy: a weekend of mountaineering and safety on Mont Blanc

Alpinism, courses, safety and fun on stunning Mont Blanc. The simple recipe of the Arc'teryx Alpine Academy 2013 that took place from 14 - 16 June at Chamonix to find out more about climbing and alpinism.

Exciting. Interesting. Instructive. These are the first three words that spring to mind when I look back at the Arc'teryx Alpine Arc'Ademy that took place in Chamonix, France, last weekend. A long weekend of mountaineering and climbing, set on beautiful Mont Blanc and open to all those who wanted to find out more about mountain safety. More than 300 people from 19 countries answered this call and I must confess that when I saw them all there, huddled together below the cable car in Chamonix at 7am on Saturday morning, it was quite a sight... But the organisation proved impeccable and the various groups immediately dispersed at high altitude. Yes, because the event was divided into numerous "clinics", courses ranging from ice climbing for beginners to glacier travel, basic mountaineering skills, GPS orienteering, mountain medicine etc... In short, something for everyone at a discount price thanks to an agreement between Arc'teryx and Chamonix mountain guides.

The weather on Saturday morning didn't seem all too great, the sky was overcast and the damp heat was oppressive. But up in the mountains it was quite a different story, at 3842m on Aiguille du Midi the wind blew with all its might and we needed to get kitted up, and fast. Jacket, hat, gloves, harness, helmet, crampons, ice axe and away we sped, off down the spectacular aery ridge which had been equipped specifically for the meeting with a fixed rope. A good test nevertheless, a first filter which opened up onto the spectacular Glacier du Géant. Some groups headed off left for their lessons, others continued on down to Refuge des Cosmiques to climb the classic Arête des Cosmiques, while many others continued straight on. Like me, they had opted to traverse the Vallee Blanche from Aiguille du Midi to the old and new Rifugio Torino, and this choice couldn't have been better! The clouds raced past us offering spectacular views onto the peaks and faces that have made the history of mountaineering: Les Grandes Jorasses, Aiguille Verte, Grand Capucin, Trident du Tacul, Dent du Géant ... Every now and then our guide stopped to recount something special - fantastic his recollection of Cristoph Profit and that famous free solo of the American Direct he'd witnessed up close, from a helicopter, in 1982! So there we were, on the slopes of Mont Blanc, nothing more than tiny dots immersed in an icy fairy tale, a privilege best interpreted by the lady tied in infront of me. She'd retired several years ago and, as a true Chamoniard, had done this crossing numerous times before but the meeting, she told me, was too interesting to miss. She wanted to breath the atmosphere of this event and gaze at those peaks for the umpteenth time. "Mais bien sur," she said "c'est trops belles ici." How could I argue with this? Then the wind picked up, meaning that we wouldn't take the panoramic cable car back from Punta Helbronner and so we descended down to Courmayeur in Italy, had a good coffee and returned to Chamonix by bus.

It was 4. Just enough time for a well-deserved shower, then the program continued. First off, an excellent barbecue that even the pelting rain failed to dampen, followed by the "Alpine Movie Night" with films presented by the climbers themselves: Nina Caprez and "her" fun Silbergeier, Holtanna by Franck Dalmat and Sam Beaugey, Mathieu Maynadier and the impressive ascent of Kamet in India (which earned him the Piolets d'Or), Harald Philipp and crazy mountain biking and Will Gadd with his audacious ascent of the Hunlen Falls. If the idea was get us dreaming, that night many found gold!

Sunday. On the last day the menu offered all the previous courses and, having heard the stories the night before, I was tempted to see Will Gadd in action climbing ice, or join Josune Bereziartu and Rikar Otegui on their interesting rock masterclass. There was no time for the mountain bivouac with Ines Papert but instead there were the likes of Nina Caprez, James McHaffie, Mina Leslie-Wujastyk, Matthias Scherer, Tanja Schmitt, Maciej Ciesielski, Luka Lindic, Isabelle Santoire... In short, the list of mountaineers and climbers, of ace athletes there to teach and share their know-how was impressively long. Yes, I was tempted, curious... but in the end the thought of re-checking some rescue maneuvers got the upper hand and I opted for Crevasse Rescue clinic. In my small group there was a lady who'd a vested interest in this course: a few years back she and her partner had fallen into a crevasse, luckily they had been rescued unharmed! But the shock was still there, so up we went, back to Aiguille du Midi once again to find out more. Unlike the day beforehand, today was windstill, there wasn't a cloud in the sky and the sun shone brilliantly, finally we got to see the summit of Mont Blanc in all its glory. Simply amazing! But we certainly weren't here for the view: with our guide we tied knots, arrested falls, buried the ice axe firmly in the snow, tied prussiks, made a simple hoist, a double hoist... Put in other words, a full day on the slopes on Mont Blanc checking the ABC of self-rescue. Great. So great in fact that at the end of the day what weighed us down wasn't the effort of all that rope work, it wasn't the steep ascent to the cable car that gets even the strongest breathing just a little bit harder, but the thought that this long event had already flown by. It had be an exciting weekend. Interesting. And instructive. Fortunately though the Arc'teryx Alpine Arc'ademy is already set for next year!