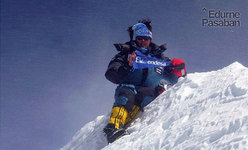 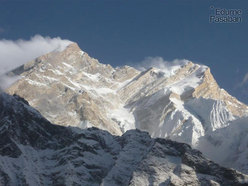 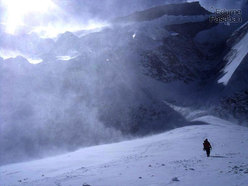 On 17 April Edurne Pasaban from Spain's Basque country reached the summit of Annapurna, her 13th 8000m peak, while Joao Garcia from Portugal completed the collection of the 14 highest mountains in the world. Asier Izaguirre, Alex Chicón, Nacho Orviz and the Sherpa Mingma, Pasang and Gempu from the Pasaban team all reached the summit, too.

Last Saturday was a long day up on Annapura, an extremely long day. For Edurne Pasaban it was certainly extremely tough but also beautiful as she, together with her "Al filo de lo impossible" team mates, reached the 8089m summit of the Goddess of Plenty at 14.00 (local time) after having left Camp 4 over 10 hours previously. And it's just as certain, if not even more so, that the summit of 43-year-old Portugese alpinist Joao Garcia is one to be remembered, as Annapurna marks the end of his beautiful journey across the fourteen 8000ers - he is now the 10th to do so without supplementary oxygen. And for the record, this ascent also marks another small "first": this is the first time that Annapurna has been climbed so early on in the season; the previous record, set last year, was 21 April.

The Basque alpinist - who with this 13th climb is now getting close to the end of this authentic race to become the first woman to climb all the world's highest peaks - reached the summit together with team members Asier Izaguirre, Alex Chicón, Nacho Orviz and Sherpa Mingma, Pasang and Gempu. But the first to set foot on the summit was Joao Garcia who had set off from Base Camp a day later than the Spanish team yet completed the entire ascent in three days instead of four. This is no doubt an excellent way to crown his great, long Himalayan journey (all without supplementary oxygen) which began 17 years ago with a Polish international expedition led by Krysztof Wielick which resulted in a new route on Cho Oyu.

Edurne Pasaban has naturally stated that she is happy with the 13th peak even if, as she said, it proved extremely tough, in particular the final section at circa 7900m where the team had to climb a thin ice gully which required some difficult and delicate step cutting. This is one of the reasons why the team remained on the summit for as short as possible and, after the ritual photos, descended to Camp 4 where they spent the night before returning to Base Camp on Sunday afternoon. From what can be gathered on the official website, both Edurne Pasaban and Nacho Orviz suffered eye problems during the descent due to dehydration. Nevertheless, they now have their sights set on the next objective, Shisha Pangma.

Yes, because Miss Oh Eun-Sun, the Korean alpinist who with 13 8000ers under her belt is the other protagonist in this photo-finish race to become the first woman in the world to climb all 14 8000ers, is there, at Annapurna, intent on summitng the only peak she still hasn't climbed. It seems as if the forecast summit days will be between 22 April and 5 May... and in the meantime, Edurne Pasaban and her team are programming their final "seige" on Shisha Pangma, the smallest giant, the only one missing and the only one which has driven her back four times.

What can be said, other than the fact that this authentic race is very worrying indeed? As everyone knows the golden rule in mountaineering, above all in Himalayan mountaineering, is that haste often offers poor advice. It is not only for this reason, but also because of this, that Nives Meroi (12 8000ers) withdrew from this "competition". And perhaps it is because of this that Gerlinde Kaltenbrunner (12 8000ers), without too much fuss, is attempting Everest from the north. It's likely that, unlike Pasaban and Oh, Meroi and Kaltenbrunner have chosen a path which not only does without supplementary oxygen altogether, but which also focuses on the "style" of ascent. We wish both Miss Oh and Edurne Pasaban a beautiful ascent and a grand finale, without an absurd race which, in all things go well, can result only in senseless and additional risks...