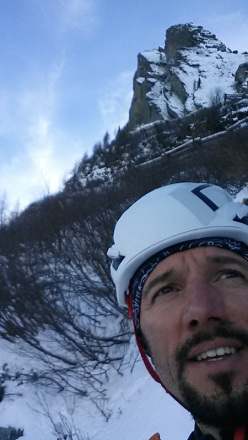 Cristian 'Cinghio' Candiotto got his winter season off to an interesting start high up in his local Val Gerola with the first ascent of Anitaice, a subtle line of rock and ice up Denti della Vecchia. 140m of climbing with difficulties up to an estimated M5, climbed alone...

What can I say, at times fortune favours those who stay at home... I wanted to get out, but not travel for hundreds of kilometers, enjoy the fine weather and do a touch of good old mountaineering... so why not climb in my backyard, seeing that I now live in Val Gerola? I asked some friends to send me some photos of Denti della Vecchia and identified an ephemeral line of ice that runs next to Anita 2000, the route put up by Sergio Mafezzini, a fellow Mountain Rescuer. Perfect, just what I wanted!

On Saturday morning I made my way to the base of this early season present and realised that the ice wouldn't been quite as simple as it had seemed, thin and poor quality, my I was highly motivated and convinced... One step after the next, past the slab to the gully, from the gully to the vertical face to reach the end of my adventure! I certainly couldn't have asked for more!