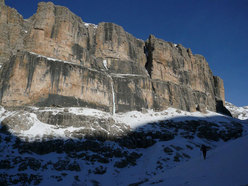 7 die in avalanche in Dolomites

It happened the other night in Val Lasties, one of the most beautiful valleys in the Dolomites, wedged between the Pordoi and Sella. It happened and we don't want to talk about it. This always occurs when someone dies in the mountains, but this time, if it's at all possible, it's harder then ever. Not only because it's Christmas. Not only because one cannot remain indifferent went someone dies doing something we all love. But because this time the avalanche also swept away four rescuers.

At 18.00 on Saturday evening four volunteers of the Mountain Rescue squad strapped their skis on and, together with other three companions, descended into the dark into that valley they knew like the back of their hands. They wanted to rescue two men who had not returned from that valley.

We now know that none of them wil return, neither the four men from the Val di Fassa Rescue Squad, nor the two walkers from the Friuli region who had descended the valley in the morning with their snowshoes.

An enormous avalanche buried and dragged the rescuers for more than 400 meters while they descended from Rifugio Forcella at Sass Pordoi. Diego Peratoner, Ervin Riz, Alessandro Dantone and Luca Prinoth all died in the avalanche, the other rescuers Sergio Valentini and Roberto Platter were injured while Martin Riz fortunately survived and managed to call for help.

The bodies of the four men were recovered yesterday morning, as were the bodied of Fabio Baron and Diego Andreatta, the two missing walkers, aged 30 and 31 respectively.

There are stories which can never be told in their essence, in their complete truth. We will never know precisely why the two youngsters from the Friuli chose to go to Val Lasties on Saturday, although it seems they may have gone to check the conditions of some icefalls they planned to climb. What is certain is that it's no secret that currently the avalanche danger is high, in the Dolomites and the entire Alps. It's not unlikely therefore that the two knew about this danger.

What is certain is that the seven members of the Mountain Rescue Squad who answered the call knew about this danger. But they received the call and set off nevertheless: someone was in difficulty in Val Lasties, they didn't need to know more. This is all the Mountain Resuce teams need to get out there and risk, voluntarily, their lives to help those in difficulty.

Diego Peratoner, Ervin Riz, Alessandro Dantone and Luca Prinoth were all expert alpinists, Mountain Guides, ski instructors, even champions. They people born and bred in the mountains who had an inborn love for the mountains. The same love as the two youngsters they set off to rescue. And in this extremely sad moment, we manage to think about only this.

In this moment our thoughts go out to their families, their parents, children, siblings and friends. And we would also like to remember Dario De Filip, Marco Zago, Fabrizio Spaziani and Stefano Da Forno who died when their Rescue helicopter crashed to the ground last August. Our thoughts go out to those who remain, to their immense pain. And we think about the solidarity of these men who, through their actions, gave meaning to an otherwise empty word.