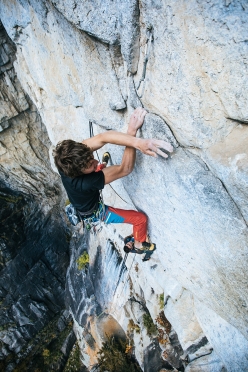 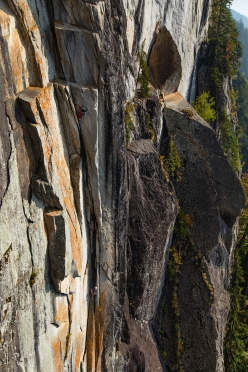 Scoglio di Boazzo in Val Daone is known as the mini-Yosemite for climbers from Brescia and the Trentino region of Northern Italy. Famous for the aid climbs put up by Ermanno Salvaterra, in 1997 Rossetti and Rivadossi forged their way up Morange and, in doing so, established Italy’s first A5 aid climb.

Over the years I’ve repeated many of the sports climbs and alpine undertakings here and, teaming up with various partners, I’ve always been inspired to work a beautiful route and subsequently free it. One of the routes which attracted me most recently was Psycobar (Rivadossi Zipponi 1998 7b/A1 230m) located on the steepest section of the Scoglio. I repeated it twice but, alas, on the lower section I had to make a pendulum and aid another. Not the best for a free climb.

I decided therefore to look at the crack to the right, taken by an aid climb called Orion (110m A3). I tried to climb it with my brother Tomas, the first pitch has two smooth sections that discouraged him but seemed to suit me perfectly. The topo indicated a pendulum leftwards on pitch 2 and although I noticed some pegs that led up a narrow crack, I decided to follow my instinct and continue straight up. I called this new variation Variante del Gufo, the owl variation; naming it after the landlord seemed the least I could do (at this point I’d like to take the opportunity and apologise to him for having woken him twice).

Fantastic, the new project seemed feasible and so on 27 September I teamed up with Mirko Corn to redpoint pitch 1… That Wednesday was one of those low gravity days and, completely unexpected, I freed the pitch on my first attempt.

Having nothing else planned for the day I suggested Mirko try the Owl variation. Banking on all his Yosemite experience and motivated by the beauty of the climbing he sent this straight off. A further pitch then led us to Psycobar, meaning that we’d found a free variation to Orion!

It was still early and I wanted Mirko to try some of the upper pitches. Things ran smoothly for a few pitches but then as expected, I fell at the overhang. I lowered off and Mirko gave it a go, discovering a spectacular foot hook… It was my turn and suddenly there I was, stretched out fully horizontal, reaching for the jug before controlling an epic swing. Luckily today was a low gravity day! The topo indicated a variation called Gatto Silvestro, Sylvester the cat which recalls my first name, and so there was no doubt which line I’d follow. Some delicate but well-protected climbing led us to the final belay, without every having hung off a single bolt…

I reckon this link-up is undoubtedly the most beautiful free climb combination up the Scoglio.