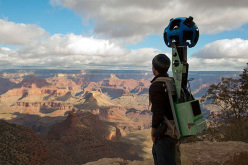 Google Trekker at the Grand Canyon, USA
Photo by Google

Google and the Swiss Alpine Club (CAS) have launched a project to map a series of paths in Switzerland with the Google Trekker technology.

Google's project was started a few years ago: to map not only all the world's maps with its Street View technology but also digitalise the most beautiful and remote places on this planet. For some time now it's been possible to wander - online of course - around Everest Base Camp, but on Tuesday Google announced that it will join forces with Club Alpin Suisse to map a series of paths that lead up to some mountain huts.

This is the first time the US internet giant is providing its technology in Switzerland, in particular the rucksack that makes the 360° panoramas that can then be viewed on Google Maps, such as the Grand Canyon in Arizona. The first clips will be made in the Bernese and Valais Alps and we cannot but wish happy and safe walking: the backpacks weigh 18 kg!