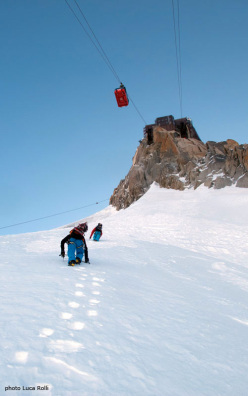 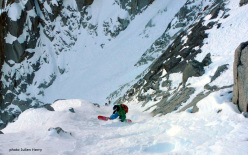 On 20/11/2012 Julien Herry, Francesco Civra Dano, Luca Rolli and Davide Capozzi skied and snowboarded down the famous Mallory Route on Aiguille du Midi in a 14-hour round-trip starting from Chamonix.

Ski the Mallory route at the start of season? Impossible, the symbol of extreme skiing in the Mont Blanc massif doesn't come into condition until much, much later. Or perhaps it is feasible, all you need is the right intuition for this famous route up the North Face of Aiguille du Midi as Sweden's Andreas Fransson proved a few years ago. And seeing that the cable car is closed at the moment, you need to be on top form to ski this line after having ascended 2700m vertical meters. Last Tuesday Julien Herry, Francesco Civra Dano, Luca Rolli and Davide Capozzi set off from Chamonix and ascended and skied the line in 14 hours, showing us that barriers are often and above all in the mind.

It was Julien who first thought of it and, living in Chamonix, he'd managed to observe the North Face of the Aiguille du Midi. He originally suggested we ascend above Plan de l’Aiguille to see if anything could be skied, but he reckoned we might even stand a chance with the Mallory route...

The thought of skiing the Mallory route in November is pure madness. Autumn normally isn't the right season for north faces, the mountains are dry, it's only just begun to get cold and the first snowfalls don't produce enough snow to ski such steep slopes. But a few years ago Andreas Fransson proved the opposite by skiing the Mallory route in autumn, making use of the last days of the Aiguille du Midi cable car before this closed for the yearly maintenance.

The Mallory is the symbol of the steep ski descents, famous above all because it's the most obvious line and clearly visible from Chamonix. And also because it's located right beneath the Aiguille du Midi cable car and therefore inevitably linked to it. Dealing with this line without the help of the cable car (this shuts down every November for maintenance) and in autumn was a real challenge. Above all we needed to be motivated to ascend 2700m for a run which Luca, Julien and I had already done before and which we stood a real chance of having to turn back.

I myself was rather worried about the descent itself, I hadn't skied anything steep since June and being on the North Face of the Aiguille du Midi at the start of the season went again all my principles for survival. We set off from Chamonix on 20 November at 2:30am, at 12:30 we reached the summit rocks of Aiguille du Midi and at 17:30 we were back in Chamonix. 14 hours in total.

In the end we were really pleased to have encountered good snow conditions almost all the way down the line. And we were really satisfied for having done the Mallory route in a different, perhaps unique manner from how its done normally. For me all these factors (the incognita of skiing it in autumn, the 2700m altitude gain in a single day and the difficulty of the descent) all rendered this one of my most difficult adventures ever.