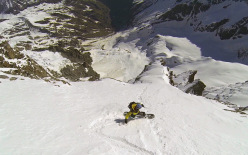 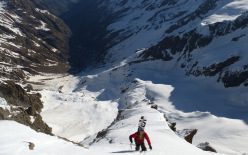 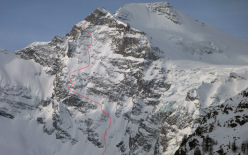 On 18 May 2014 Davide Capozzi and Julien Herry snowboarded down the NE Face of Testa di Valnontey (Gran Paradiso), skied for the first and only time by Remy Lecluse in 2010. The report by Davide Capozzi.

I always like thinking about my friend and the incredible French skier Remy. For the second time this year Julien Herry and I have repeated one of his descents. Remy really loved the Gran Paradiso massif and he carried out numerous first descents here: Grivola, Petit Paradis, Becca di Montandayné to name just three.

After the South Face of Grivola descent I began to examine more closely the amazing NE Face of Testa di Valnontey, a mountain unknown to most, but the one that can be seen best from Cogne: a 650m high face, completely rocky for most of the year with a long approach and descent. The sun hits the face at around 7:00am and this means it needs to be skied early, above all in late spring.

This is why Julien and I decided to start at night: we set off on foot from Valnontey at 1:45 a.m. And , 2 hours and 6 km later, we finally clipped on our split. We reached the 3510m high summit shoulder, situated directly below the top, at 8 am. Snowboarding this line that had been skied only by Remy, while his words echoed in my head, was something special... "The ambient is really airy: the start is exposed above rock bastions. To reach the main slope I traverse left for 50m: delicate, 20cm of snow plastered onto rocky slabs. It was delicate during the ascent but frankly speaking unpleasant during the descent: balance, ice axe above me as I plant the pole below, trying to delicately place my skis on the snow, above all no sliding sideways!"

I think that, despite snow conditions not being the best, we were lucky with the conditions and once again I can say: thanks Rèmy!