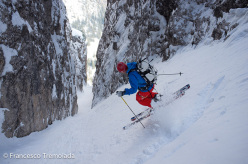 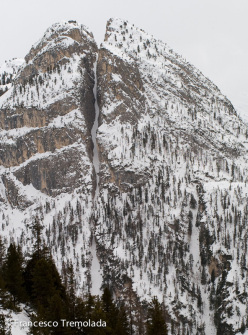 On 04/04/2013 Francesco Tremolada and Norbert Frenademetz skied the North Couloir of Sass Dlacia in the Dolomites.

It's not a first ski descent, but probably the second of this stunning colouir that splits the North Face of Sass Dlacia and which only came into condition thanks to this exceptional winter's abundant snowfalls. The report by Alta Badia Guides member Francesco Tremolada is published below, while more photos can be viewed on his site.

The North Couloir of Sass Dlacia cuts straight down the north face of this minor Alta Badia summit, known above all for its beautiful sports climbs on the west face. The mountain in itself isn't enormous, but the line of descent is fascinating and for those who love steep skiing it's a draw which is hard to ignore.

We monitored the snow conditions for various seasons through our binoculars, but a series of vertical drops resulted in the snow cover from being continuous. Until this season, one of those which we'll probably remember for a while and which will hopefully provide plenty of other great descents.

We ascended from the other side, from the Lagazuoi cable car and thanks to the ideal snow cover and not too high temperatures we skied the entire line with only two short abseils (bolt abseil), without ever taking our skis off. A big thanks to Norbert Frenademetz, always ready for a new adventure.