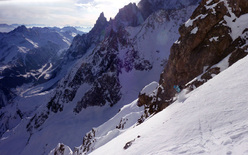 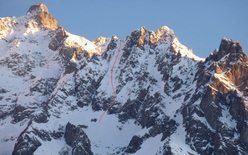 After years of waiting for the right conditions, on 13/02/2012 Davide Capozzi and the Mountain Guide Stefano Bigio carried out a first ski and snowboard descent on Mont Rochefort (Mont Blanc). The report by Capozzi.

A long and powerful rocky crest heads off SSE from the Aiguille de Rochefort, separating the Rochefort glacier in the west from Plampincieux in the east. The apex of this crest in Mont de Rochefort (3456m). We skied 450m down the SW Face and we succeeded on our second attempt: on Sunday Luca Rolli, Julien Herry and I gave it a go but we turned back because we had too little gear to climb the first mixed section in safety. So the descent came about the next day, together with Stefano Bigio.

The ascent starts with a short 50° gully which leads to a mixed section which demanded a fair bit off poor Stefano (two pitches of transformed snow up rocky slabs, with ski boots, skis strapped to our rucksacks and difficult pro), and this led to the face proper. The descent is continuously exposed, down 45° - 50° slopes. The snow varied considerably since it hadn't settled completely. We made tow abseils dwn the final section, one 50m abseil followed by a second, shorter one. I think that in spring snow conditions and with more daylight hours it's possible to avoid at least one abseil. Oh yes, because we descended late, at 16:30 and when we reached the mix section dusk was setting in and we didn't want to take any unnecessary risks. We'll long remember the descent from the Marbrées glacier by the light of our headtorches! We suggest an overall difficulty of 5.2 E3.

This is the second descent that Stefano and I have carried out on Mont Rochefort after our 2010 ski, and it's incredible to see how much this crest offers! We called the descent "Pente a Remy" and the original idea came from the highly talented French skier Remy Lecluse (for the record, the first to ski the Mont Rochefort Diagonale) who years ago suggested we ski this line he'd made out. Unfortunately the temperatures rose the next day and ruined the face so we had to give it a miss. So this descent is also a bit for him.

- Davide Capozzi, Extreme skiing, when falling is simply not an option