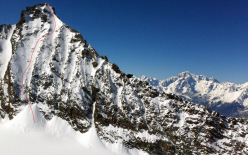 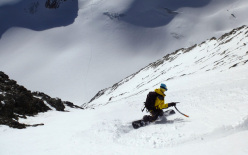 I've now skied this stupendous mountain for the third time, via a third, different route. In 2010 Roch Malnuit, Julien Herry and I skied the NW Face and in 2012 together with Francesco Civra Dano and Luca Rolli I skied the NE Face.

I wanted to return to Grivola this year to descend the SE Face, skied only once by my friend Rémy Lecluse and Boris Dufour in 2012, on the same day as I skied the NE Face. Unfortunately Rémy is no longer with us, he died in autumn 2012 on Manaslu in a terrible avalanche. The SE Face of Grivola was Rémy's last great descent. I've always thought that the best way to say goodbye to him was to return to Grivola's summit and ski the SE Face, the only face that had only been skied once before, on that 14th of May in 2012.

On Sunday 30 March Luca Rolli, Julien Herry and I ascended to Rifugio Sella where we were warmly welcomed by the hut warden Jean Mappelli. The alarm clock rang at 2:30am; we immediately realised that we'd set off too early and so we slowed down, rested at Colle della Nera and enjoyed day breaking. The face seemed to have more snow than when Rémy skied it; perhaps, if we're lucky, we'd manage to ski it just as Rémy would have liked, namely without using a rope on the steepest, narrowest section.

At around 9:30 we stepped into our skis and snowboards; the snow on the upper section the face was still wintery, beautiful and great fun to ski on. Things then got complicated: crusty snow with a hard layer underneath, not always the best of fun. We reached the crux of the descent, pretty narrow but by scraping a bit on the rocks we managed to continue on down and finally exit the face, happy with out descent.

We were tired by I managed to convince the others to ascend up to Nera della Grivola (3683 m); we reached the summit in about half an hour and then skied the SE Face, directly opposite Rifugio Sella, udner the watchful eye of Jean who waited for us with some cold beers.