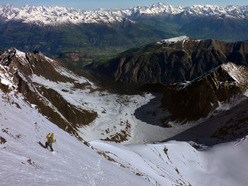 The video of the ski and snowboard descent of the NE Face Mt. Grivola carried out by Davide Capozzi, Luca Rolli and Francesco Civra Dano on 14/05/2012.

After the report and photos, here's the video of the recent descent of the steep NE Face of Mt. Grivola, the beautiful peak which stands out starkly against the horizon when driving north from Aosta towards Courmayeur. The mountain is located in the Gran Paradiso massif therefore, was skied for the first time on 13 July 1980 by famous extreme skier Stefano De Benedetti and, since then, has be skied very rarely indeed. Here's the latest descent, carried out on 14 May by the Italians Davide Capozzi (his is the first snowboard descent), Luca Rolli and Francesco Civra Dano (with skis).