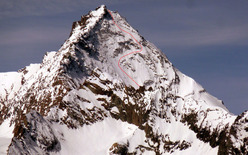 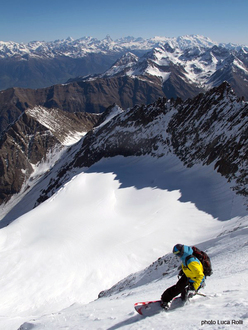 On 14/05/2012 Davide Capozzi made the first snowboard descent of the NE Face of Mt. Grivola, accompanied by the skiers Luca Rolli and Francesco Civra Dano.

At this point in time many have already stashed their skis or snowboard away for the season and are busy climbing or enjoying spring in the mountains in some other way. But conditions for ski mountaineering and extreme skiing are great, all you need to do is climb high and look in the right place. This is exactly what the Italians Davide Capozzi, Luca Rolli and Francesco Civra Dano did two days ago when the descended the NE Face of Grivola, the stupendous peak clearly visible from the road which connects Aosta with Courmayeur.

This descent is a rare ski and, above all, the first time the face has been snowboarded. "I still remember" Capozzi confided to Planetmountain "when it was skied in the '90's by Toni Valeruz. The television was there and filmed the entire descent (the images were impressive to say the least!)... I'd never have thought that, 20 years later, I'd be there to snowboard it myself!"

"Grivola is located in the Gran Paradiso mountain range and is clearly visible from Saint Pierre, the small village just a short distance from Aosta. In 2010 I descended the NW Face together with Roch Malnuit and Julien Herry and ever since then I've always thought about returning to this beautiful but distant mountain. My desire was to snowboard down the repulsive NE Face

On 13 July 1980 Stefano De Benedetti first skied this stupendous face (which rarely comes into condition) and this feat was repeated at the end of the '80's by Swissman Dominique Neuenschwander and by Toni Valeruz (with helicopter) in the '90's. Thanks to this April's abundant snowfall the face seemed in condition this season and Luca, Francesco and I didn't want to let this occasion pass us by.

On Sunday evening we reached the Gontier bivy after a 1000m path; the place was beautiful and the bivy extremely welcoming. We set off at 3:00am and needed to tackle another 1600m elevation gain: a short section with skis, then we continued with crampons towards the glacier at the base of the face. We reached the Bergschrund at dawn, then continued upwards for another 600m towards the summit. The slopes are circa 50° steep but the higher we get, the better the snow becomes. The final 100m steepen up and unfortunately there was still plenty of snow, up to 10cm on rocky slabs and ice as smooth as glass! This was obviously the most demanding section, there were three of us and descending the first few metres was by no means simple. The rest of the descent was far easier all the way down to the final slopes above the Bergschrund where the snow had remained hardpacked due to the low temperatures.

But there was more to come, to reach the bivy we still needed to descend the steep, icy, slopes which had already been exposed to avalanches. This, in short, is what Grivola is all about."