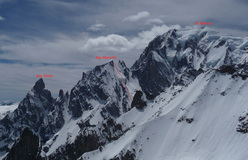 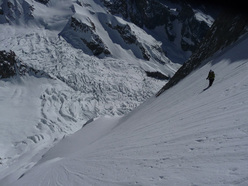 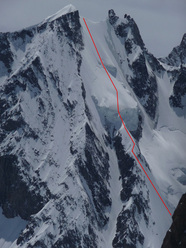 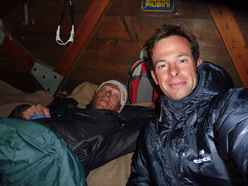 On 04/06/2010 Francesco Civra Dano and Luca Rolli skied the North Face of Aiguille Blanche de Peuterey (Mont Blanc) via the Grivel - Chabod route. The first and only ski descent was carried out in 1980 by Stefano De Benedetti.

On 4 June the Italians Francesco Civra Dano and Luca Rolli carried out the second descent of the Grivel - Chabod route, the classic line up the North Face of Aiguille Blanche de Peuterey (Mont Blanc). First ascended in 1933 by two exceptional alpinists, Renato Chabod and Aimè Grivel, this 700m route presents difficulties up to VI D and had been descended with skis only once previously, namely in 1980 by Stefano De Benedetti.

Dano and Rolli made headline news at the end of April with the probable first descent of Voie Anderson on Mont Maudit, and on 4 June they ascended the gully to the right of the serac (700m III, D, M. Bastien, M. Coutin, G. Gaudin e P. Julien, 1952) and then descended the 1933 route which leads right through the middle of the serac and continues, after a brief abseil, down the thin crest. The descent is graded 5.3 E4, with an initial slope steeper than 50°.

Before reading Rolli's report, we thought it would be interesting to delve into the past and put the 1980 descent into perspective. Rolli explains: "30 years have passed and no one has ever returned with their skis, perhaps de Benedetti even managed to do without the abseil. The fact of the matter is that he was a forerunner, one who anticipated by at least 20 years the extreme ski descents which have since been established. All credit goes to him for having skied, on his own, some descents which even today have not been repeated in the Mont Blanc range. He was simply the best."

100 times Blanche. Or better still: Blanche Obsession
by Luca Rolli
Winter has come and gone and with it some exalting moments and some deep abyss of depression in the presence of avalanches. On Punta Heilbronner Francesco, Davide, Jimmy and I skied the skiable, and in spring the trips began: Col du Cristaux, Couloir du Diable, Cordier a les Courtes, Anderson on Maudit, Eugster on Midi, the North Face of Tour Ronde. Then summer arrived but something was missing. We weren't satisfied. Our dreams brooded beneath the ashes. Blanche de Peuterey was always there, right in front of us, elegant and magnificent.

At this point only the words of Stefano De Benedetti echo through my mind: "In the perfect moment I was so concentrated there was no space for other thoughts."

We shot down onto the slope, one curve after the next. I felt as if I was skiing on air. Beneath us the majestic Brenva, on our side the Peuterey ridge and Pillar, the Jorasses in front of us. It was all perfect. We descended down the first slope; we abseiled down the serac to reach the ridge below; skied quickly down the finishing slope. We were at the base of the North Face of the Blanche. And now we were at the Brenva. We continued quickly, slaloming between the gaping holes and chucks of ice which exploded from above. Down quickly, faster and faster. Brenva was now behind us. The glacial moraine and the forest below told us that we'd reached consecrated land.

Nord Della Aig. Blanche de Peuterey (4112m)
First ascent North Face: Renato Chabod and Aimè Grivel 04/09/1933
2010 ascent: the two Italian alpinists ascended the gully to the right (700m III, D), first climbed in 1952 by M. Bastien, M. Coutin, G. Gaudin and P. Julien.
2010 descent: the two descended the 1933 Chabod - Grivel route (700m, IV D).
Grade: the descent is graded 5.3 E4. The first slope is steeper than 50°.
Description: Complex outing, both during the approach (cross the Brenva basin quickly during the night) and the descnt (40m abseil over the serac). Do not underestimate the descent from the Brenva glacier into Valy Veny as this is still adventurous rerrain with worrying crevaces.
Note: If the slope is not in condition the exit routes and long and laborious.