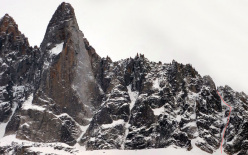 Last year, Julien Herry and I skied two new lines: one off Aiguille du Chardonnet and the other at Flammes de Pierre, both located in the Chamonix valley. Although they were two fine lines, something was missing to make them even more beautiful: we weren't able to ski them entirely. Thanks to the abundant snowfalls at the beginning of winter we decided to return to these two lines and complete them. And so, on 4 January 2013 we made our way to Chardonnet and 18 January to Flammes de Pierre. The latter gully is located close to the Drus, so the mountain environment was guaranteed to be spectacular!

The Flammes de Pierre is better known by climbers than skiers despite the fact that the glacier moraine below it hosts "Le pas de chèvres", one of the most famous descents in Chamonix. Last year we managed to descent it for the first time, but failed to top out on the top of the ridge above the the righhand gully fork as there simply wasn't enough so. This year's exceptional conditions allowed us to complete the descent. We could have been happy with what we did last winter, but since these two descents are particularly easy to access thanks to the Grand Montets ski lifts it seemed a good idea to try to complete these two beautiful lines and to take advantage the beautiful snow conditions.

Flammes De Pierre - Couloir Jess
500m high gully, 45°/50°
First descent: March 25, 2012
Description: 2 abseils, one in the lower section to breach a 50m mixed section and another close to the top, down a few narrow metres.
Note: The gully is named after Julien Herry's partner Jessica Venables who has recently become a mother for the second time.