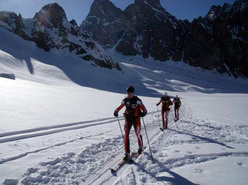 The Chamonix - Zermatt is a classic and extremely famous ski mountaineering traverse, one of the most fascinating and desired Haute Routes in the Alps. Usually this great journey "invented" by Toni Gobbi is carried out in a week, but increasingly these 100 plus kilometres are also being used as a "record track" by some of the best athletes in the world.

While the time in 2008 was 21 hours and 11 minutes, two years later it had dropped to 20 hours and 28 minutes. On 2 April this record was beaten once again, this time by Jean-François Premat, his brother Alain and Sébastien Baud who completed the tour in an amazing 18 hours, 50 minutes and 29 seconds.