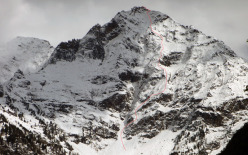 The 1940 route on the North Face of Becca di Nona (3142m) above Aosta, ascended and snowboarded by Davide Capozzi and Julien Herry on 31/05/2013.
Photo by archivio Davide Capozzi 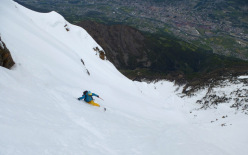 31/05/2013: Davide Capozzi and Julien Herry during the first known descent of the North Face of Becca di Nona (3142m) above Aosta.
Photo by archivio Davide Capozzi

On 31/05/2013 Davide Capozzi and Julien Herry carried out what is likely to be the first descent of the north Face of Becca di Nona (3142m) above Aosta.

It's currently an incredible season in the Alps, seemly endless. This is how Davide Capozzi sums up winter 2012/13 and after his great early start on the Mallory route last November, six months down the line and with many thousands of vertical meters under his belt, the Italian is still firmly strapped to his snowboard. His most recent undertaking: what is probably the first descent of his backyard mountain, the North Face of Becca di Nona, carried out last Friday together with Julien Herry. "The face never comes into condition, it was simply inconceivable to ski it" Capozzi told Planetmountain, "until now. We snowboarded down it last Friday, and never before did I realise that this really was the last possible day to ski it fully. In fact, right after our descent some sections were no longer skiable."

Becca di Nona, a mountain unknown to most, is the peak that towers above Aosta. Its north face overlooks the city and consequently it's impossible not to look at it. This is where I was born, I've lived here for more than 30 years and I've always said that if one day it were to come into condition, I'd give it a go. Imagining a skiable line down this face is by no means easy: in winter snow never sticks sufficiently and in spring, due to the mountain's relative stature (3142m) snow doesn't have time to settle and the skiable sections rapidly melt away.

This year though everything is possible, we're currently enjoying the most incredible spring I've ever seen and we had just the right conditions: lots of snow plastered to the mountain combined with low temperatures. Finding someone interested in giving this a go wasn't easy, which is understandable since it's such an unknown mountain and probably not particularly attractive due to the conditions. So it's for these reasons that I'd like to thank Julien Herry for accompanying me nevertheless. In the end we were rewarded with a unique descent in a most unusual setting. Finally, I like to point out that the only person who talked to me about this descent was Rèmy Lecluse, someone who always noticed these sorts of descents, wherever they happened to be.