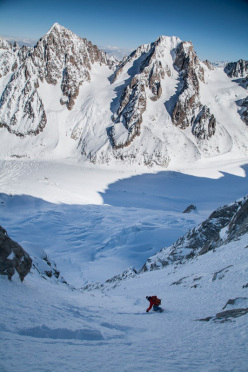 Davide Capozzi reports about the recent ski and snowboard descent of the Aiguille Carrée Couloir on Aiguille Verte, Mont Blanc, repeated on 21 February 2013 together with Julien Herry and Luca Rolli.

The Aiguille Carré North Couloir on Aiguille Verte in the Mont Blanc massif is little known and rarely skied for several reasons: firstly, the gully lives in the shadow of the more famous Couturier Couloir, secondly because the entire line rarely comes into condition and thirdly because the lower section is exposed to the Cordier seracs.

With Julien Herry and Luca Rolli we decided to check it out because it's a difficult, interesting line and, above all, it would enable us to understand what snow conditions were like at this time of year on north facing slopes. We started off by climbing up the Ravanel-Frendo route located just to the right and we then traversed leftwards to reach the gully a few hundred metres above the Bergschrund. We did this so as to remain exposed to the Cordier seracs as little as possible. Unfortunately though this meant that we didn't see what conditions were like in the lower section of the gully and during the descent we were forced to make a short abseil past a steep icy section. The rest of the couloir greeted us with a mix of perfect winter snow, deep and beautiful to ski and sections of hard, wind packed snow.

The couloir is 600 meters long, steep and narrow and during our descent we once again saw how some sections are easier on a snowboard than on skis, namely those where there is less snow. As almost always, it is these conditions that determine how difficult a descent becomes: a stretch of ice, an exposed traverse across poor snow and rocky slabs can make a descent even more difficult than it already is.

This gully was skied for the first time by Swiss skier Neuenschwander in 1985, in 2003 Laurent Dupré snowboarded it and before him... who know... maybe Marco Siffredi who together with Bertrand Delapierre carried out first snowboard descent of the Cordier Couloir on Aiguille Verte.