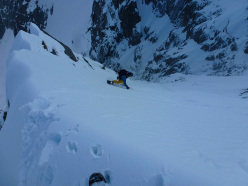 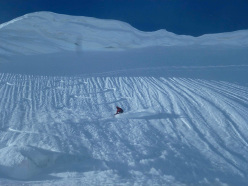 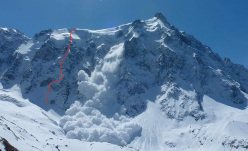 On 03/06/2014 French Mountain Guide Julien Herry made the first snowboard descent of the Éperon Jumeaux on Aiguille du Midi, along with his friend Raph Bonnet who made only the second ski descent after Jean-Marc Boivin in 1986

Last Tuesday French Mountain Guide Julien Herry and ski instructor and aspirant mountain guide Raph Bonnet skied the Jumeaux Spur, a striking line up the centre of the North Face of the Aiguille du Midi, Mont Blanc massif. The climb, first ascended in March 1971 by the French alpinists P. Dussauge and J.J. Prieur, is believed to have been skied only once before, in 1986, unsurprisingly by Jean-Marc Boivin. While Bonnett's is only the second ski descent, Herry's is the first snowboard descent.

29-year-old Herry had climbed the route in November 2003 together with his best friend Max Belleville, who unfortunately perished 3 years ago in the Vallee Blanche. “At the time we made a quick climb in the mountains to get some fresh air, catching the 1st lift from Chamonix to Plan de l'Aiguille” recalls Herry, adding “This spring I wanted to climb the route before skiing it but a lack of free time made us choose the lazy way, taking the cable car all the way up to Aiguille du Midi first. Which made for an interesting, practically on sight descent...”

The adjective interesting is key, especially if you bear in mind the fact that the Chamoniard has already amassed an enviable climbing and snowboarding curriculum. Just three examples are worth citing and serve to underline why he is one of those alpinists worth keeping an eye on: the first ascent of Tengi Ragi Tau East (6650m) in Nepal in 2005 and, closer to home, only the second descent in 29 years of the East face of Aiguille Blanche de Peuterey together with Francesco Civra Dano, Luca Rolli and Davide Capozzi. And Divine Providence up the Gran Pilier d'Angle. Aged 16.

The Jumeaux spur is located on the North face of the Aiguille du Midi, on the left side, between the Tournier spur and the Chere couloir. Its name comes from the twin seracs at the top, which are the key to access the spur without trouble. Those seracs have changed a lot in the past years and nowadays are actually almost friendly. The route was climbed for the first time in March 1971 by a French party (P.Dussauge and J.J.Prieur) and skied only once by Jean-Marc Boivin in 1986. There isn't much information about this descent, he skied by himself and apparently made only one rappel.

Last year we wanted to try the line, there was much more snow on the mountain but we couldn't find the right day to give it a go, either too warm or too much fresh snow. During the last days of May and the first days of June this year conditions were good and stable, and quite a lot of skiers have been skiing the North face. Today is the last day before hot temperatures and my friend Raph Bonnet is motivated to go have a look. We are the only skiers on the first lift this morning and after 5 minutes skiing we get to the top of the run. Clouds are coming in and make the first turns a bit stressful, luckily the snow is amazing and the slope not too steep. Then comes a complex and steep section with exposed traverses to finally reach the top of the spur. Two 30 meters rappels in between a few controlled turns lead to the main couloir, a bit wider and still steep, where we can enjoy a bit more speed. Then comes the last 20 meters rappel, some easier turns and a bit of dry skiing. The last traverse is steep, difficult both mentally and technically across exposed terrain, with some delicate steps of dry skiing. Then the last slope is less exposed but with hard snow, the Bergschrund is easy to cross and a few minutes later we are back at the mid station, happy to have ridden one of the most exciting and technical runs of our lives.

First snowboard descent and 2nd ski descent... After the East face of Aiguille Blanche de Peuterey last year (second descent 29 years after Stefano De Benedetti), what a chance to do another second descent down a mythical face, almost 30 years after such an incredible alpinist and skier. Thank you Mr Boivin for the inspiration, thanks Raph for the good company, it is time to put the boards away now... until next winter.