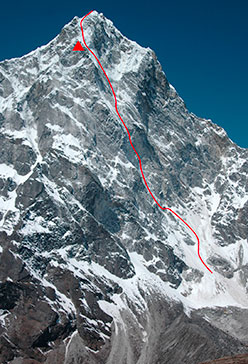 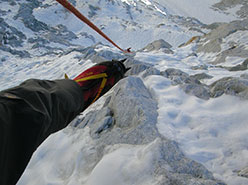 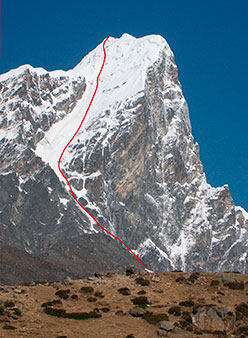 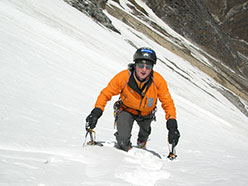 Ueli Steck and his solo ascents of Cholatse and Tawoche in the Himalaya, in the words of Christine Kopp .

Anybody listening to Ueli Steck talking about his achievements in the mountains must have a good imagination and a bit of inside knowledge about the modern climbing elite. If not, it could appear that this man from Switzerland is just telling the story of an easy Sunday jaunt – a vertical Sunday stroll where the level of difficulty isn’t important enough to classify. The truth is very different. Over the last couple of years the 29 year old increasingly skilled alpinist, one climb after another, has become one of the world’s best climbers on ice and rock. It’s been hard work. Anybody wanting to become top in this field must be able to perform at the highest levels in more than one discipline and, if he wants to earn a living in the mountains, needs results that can be commercialised and therefore attractive to sponsors. Ueli Steck has made the grade, though he says that his brother, an equally hard working professional hockey player, earns much more money without risking his life. This is mountain professional’s lot ….

Last year, Ueli Steck created a lot of noise with his solo, no ropes ascent on Excalibur. This route is a 6b on an extremely difficult and exposed 350m wall on the Wendenstöcke, followed by a trilogy of the Eiger, Mönch and Jungfrau north faces in 24 hours with Stephan Siegrist. He’s now gone one better with his “Khumbu-Express” expedition in Nepal’s Everest region. The result was the first solo climbs of the Cholatse’s north face (6440m) and the Tawoche’s east face (6505m) – the first time either mountain has been climbed solo.

A little night climb
On what should have been the third ascent of the Ama Dablan’s (6814m) north east face -1700m vertical metres, Ueli Steck wisely decided to retreat at 5900m as the conditions were dangerous due to heavy snowfalls. Similarly on the Tawoche, as he made an initial attempt on the east face’s rocky ramparts, he realised that only a kamikaze would consider it. He alternatively chose the ice on the left of the wall which was a relatively easy (for him), regular line that took four and half hours to climb overnight on the 24th April. In the morning, following 1500 metres of ice (up and down) varying between 50 and 60 degrees with a few vertical pitches judged as M5, he got back to base camp in time for breakfast …… It was the first time in seven years that someone reached this incredible mountain’s summit.

Ueli Steck’s first solo climb of the Cholatse’s north face during this expedition was sensational. His style of climbing reflects his disagreement with larger commercial expeditions using fixed ropes, oxygen and other artificial aids. A huge wall whose difficulties are similar to the North of the Eiger (vertical ice, grade V rock according to Ueli and M6 mixed terrain). The psychological pressure is different though: even the smallest accident on this rocky bastion is fatal as there’s no chance of being rescued. As Ueli explains: “you’re absolutely vulnerable, any mistake could be fatal!”

The 14th April, three o’clock in the morning, Ueli Steck extracts himself from his cosy sleeping bag at base camp and reaches the pile of equipment lying at the foot of the wall. As he gets into the swing of the climb he falls into a state of meditation. A state in which the climb becomes central to his existence: “I’m totally concentrated on the climb and don’t even consider what might follow.” Every day life, his partner waiting at base camp are all on another planet. As Ueli admits "as soon as I’m on the wall I become a total egoist. But that’s also why I can enjoy myself with my girlfriend following the climb, impossible if I haven’t played out my wilder side hooked on action.” It’s impossible to describe the fear one has for a loved one who’s climbing solo. It’s perfectly understandable that the girlfriend is as exhausted afterwards – at least psychologically - as the climber himself.

A magic word: psyche
The psyche. The magic word for these achievements: climbing solo at this level would be impossible without the ability to concentrate one’s whole body and mind on the climb and the next step. “I’ve always had good insight”, says Ueli. So he’s never needed to study meditation techniques …. It just comes naturally. “If you can concentrate totally on something then it remains completely focussed. I knew, based on personal experience, that I could climb Cholatse. The trick is to use this knowledge whilst climbing.

What happens when fear hits you? In the bivouac. At roughly 6000 metres. Ueli Steck has managed to squeeze himself into a tiny snow hole having covered hundreds of metres of dangerous and steep terrain, belaying himself with his own rope rendering the pitches less dangerous. The worst bits, says Ueli, is the slightly less steep but more exposed terrain where you can’t belay yourself. And in the bivouac? “That’s where the problems start. It’s very difficult to calm down. It’s extremely claustrophobic. You have to try to change your frame of mind and think rationally.

The riskiest bit is the 450 metres following the bivouac: steep terrain at 85 degrees with barely transformed snow that the ice axe can’t get a bite into. Then at long last the crest leading to the coveted summit. Just 250 to 300 vertical metres to go. But …… one step after another, bits of the crest that were so thin that Ueli had to sit astride them to make any progress. Then suddenly with only 50 metres to go a crevasse cuts across the crest dividing it into two: “if I had had enough gear I would have doubled back and rappelled down – even though I was so near to the summit. This bit took everything out of me – especially as it followed a day of intense concentration during which I’d had to continuously spur myself on, this “obstacle” was really too much! 150 metres of void on both sides of the crevasse. Impossible to avoid it. I had to perform a really difficult manoeuvre: descend 3 metres on the south side, enter the crevasse, climb up it with one foot on each side, cross over to the other side as high up as possible and then the most difficult bit: exit plunging my ice axes into the powdery snow on the edge of the crevasse, hoping that they would hold at the critical moment and that I wouldn’t simply fall backwards!”

Diet according to Dr. Steck
Following this adventure Ueli had to have time to recover. Climbing at this altitude, more than 6000 metres, needs to be approached carefully so that you don’t end up mid-pitch badly out of breath. Ten minutes later – the summit. He used up his last pitons and carabiners going down the southern crest reaching the glacier’s plateau and a second bivouac. Menu: hot water. He didn’t have anything else to eat. The four power bars and one portion of spaghetti were past history. Ueli: “a well planned diet!”

Speed and therefore the weight of any material to be carried are extremely important in these circumstances. So, gear has to be reduced to the bare minimum. Every gram counts. Whilst an extreme alpinist still manages to cover vertical walls carrying a rucksack weighing 6 kilos (like Ueli) and is quick on slightly less steeper terrain where he doesn’t have to belay it is just not possible with one weighing 10 kilos. On the other hand calorie intake is also indispensable to perform properly at this level. Ueli Steck says that he would have become dangerously slow after three days with no food. But he finally got back to base camp following a “disgusting” bar of chocolate given to him by a trekker met on the descent. He gets back to his faithful coffee maker and makes his first real coffee ….

And then … Following the wall’s absolute void come a void in his heart. A total collapse that Ueli wasn’t expecting. He spent a week feeling exhausted and apathetic. An emotional void that he’s never experienced – haunted by possible things that could have gone wrong during the ascent. An obsession that almost led him to dismantling his tent and going home. But eventually joy dawned: for achieving something so extreme solo and with no help. Satisfaction that Ueli Steck admits has increased his self confidence, the ultimate form of self-gratitude. He adds though, that one mustn’t do too many of these solo ascents: it would become routine leading to a loss of concentration and inevitable mistakes. Any mistake would be fatal.

The coffee machine always with him.
A person who doesn’t know him might ask in confusion or even with anger why the extreme alpinist constantly risks his life? Why would an alpinist risk losing his life for just one climb, exposing himself to such a high level of risk? The answer is on the one hand easy to give but also difficult to understand: daily life isn’t enough for some men. They only feel alive when they are aware of their vulnerability. Sensations that once experienced become the Holy Grail. As they take this path they feel totally aware and every feeling is magnified. Falling into one’s personal void following such an experience is logical. “ Living the present intensely in its most perfect form”, is how Ueli Steck defines it. He doesn’t exclude testing his ability on an even higher mountain in the future. He thinks he should improve his psychological ability rather than physical.. But Ueli wouldn’t be Ueli if he didn’t give himself a period of peace and quiet before leaving again. He still needs his energy bars and coffee maker at home, maintaining the habit of always being alert during his everyday life just like when he’s climbing.

UELI STECK
Born in 1976, carpenter by trade now a professional alpinist and Opinion Leader for New Rock (www.newrocksport.ch) whose owner Romolo Notaris will present a film of Ueli Steck’s Tibet adventure in the autumn 2005.

His CV covers classical ascents, some going solo, difficult ascents on ice and mixed (up to M11, among which Mission Impossible, The Empire Strikes Back, a flash ascent of Tooltime, Tomohawk), sport climbing up to 8b+ (among which Hexenküche, No-Sika – no Crime), Big Walls up to A3+ and first ascents like Pumori (west face, 1400 metres, M4, 80°, with Ueli Buhler), on Mount Dickey in Alaska and on the Eiger’s north face (The Young Spider, 1800 metres, 7°/A2, W16/M7 with Stephan Siegrist).

In 2003, following two attempts on Jannu’s north face he rotpunkt climbed La Vida es Silbar (north face of the Eiger, 900metres, 7C. In 2004 he climbed the north faces of the Eiger, Mönch and Jungfrau in 25 hours and climbed solo with no security the Silberfinger route (6b, 200 metres) and Excalibur (6b, 350 metres) on Wendenstocke. He climbed the Eiger’s north face solo during the winter as well as numerous other short routes solo on ice and rock, before leaving for Nepal in March 2005 for the “Khumbu-Express”.