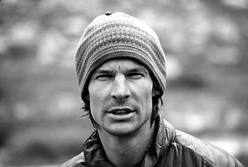 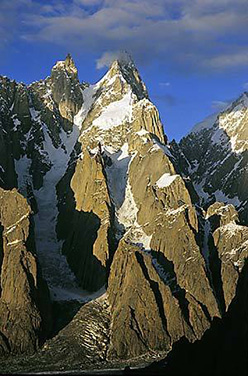 The SW Face of K7.
Photo by Steve House 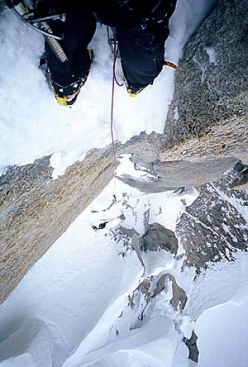 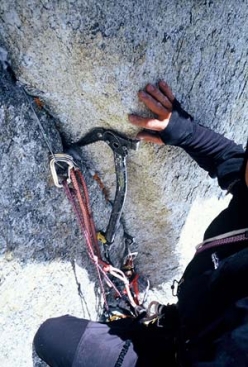 Interview with the American mountaineer who received the nomination for the Piolet d'Or 2004 for his solo ascent of K7. This climb recieved the People's Choice Award as the most important ascent of the year.

I met Steve House together with Betta Gobbi of Grivel a few hours after the Piolet d'Or 2004 Awards ceremony. He was relaxed and still a bit surprised to have been nominated for this alpine award. Steve certainly isn't a normal mountaineer, and the focus is all about ethics and style: this is his quest. For him mountaineering gains value for how it is carried out, and it is only this path (without compromises) that stimulates and amusse him. Steve's focus is "alpine style", always, carried out to the extreme. This is a very personal choice: a search for completeness, carried out first and foremost for himself... "And ehat people draw upon for inspiration is up to them."

Steve, are you happy with this nomination for the Piolet d'or?
Yes...

But what do you think about prizes in general, can you receive awards for a mountaineering ascent?
An acknowledgment and victory in a competition, an award are two things which cannot go hand in hand. For me it is not necessary to win a prize to be acknowledged for what I'm doing.

Have you just spoken from your heart?
I think I have a very precise idea about what alpinism really is. For me it has very specific ethics. Some ascents are carried out with the use of fixed ropes, bolts etc... This isn't alpinism for me, not modern alpinism.

Is this approach applicable tor just yourself, or do you feel it should be attributed to all?
Practically only to myself, even if it should be for everyone. The best way to communicate my idea of alpinism is via my way of climbing mountains. What people draw upon for inspiration is up to them, they can be inspired by the style used by the Russians (such as that used on Jannu, editor's note) or by alpine style...

Your ascent of K7: your experience, and choice, of going alone. Where did it stem from?
The first thing that must be said is that this wasn't a normal choice, or rather, it wasn't for me. Climbing solo for me is like choosing and using a piece of gear. So on K7 my solo was a perfect tool which enabled me to climb quickly, there and back, and succeed.

So your choice wasn't motivated by a desire to be isolated.
No, it boiled down to choosing the right piece of gear, opting for a system that works, ideal for what I wanted to do in that moment. To give you another example: Marko Prezelj was there, at K7 base camp. It would have been simple to rope up and climb together, but we would have needed much more time to carry out the ascent.

Let's talk about style of ascent and pure technique. What do you consider to be important about your K7 route and experience?
Throughout his or her career every climber undergoes a personal evolution. The most important thing for me about this ascent is how much it pushed me and obliged me to evolve my way of climbing. I learnt a great deal from the situations in found myself in.

From a human point of view, what did K7 teach you?
This is a difficult one to answer... I could talk about this for an hour...

Tell me the first thing that springs to mind about this experience...
When you climb alone you have to be motivated by something pure. A pure spirit and an integral motivation. This is what pushes you higher.

Was it an ascent that exalted you?
Every climber tends towards the perfect ascent which has to be mix of physical and psychological difficulties. This is done for him or herself, for the person. When you manage to fit all these pieces together you feel entire, complete. K7 was the ascent that made me feel complete.

You made three attempts on K7: you set off, returned then set off again three times... was this the hardest aspect of the climb?
Psychologically this was difficult, certainly... But every time I set off I got closer to the summit, because each time I learnt something new. I had to be at my best, and i needed three attempts to be just that.

Is "your" mountaineering fun?
Yes, absolutely!