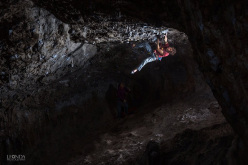 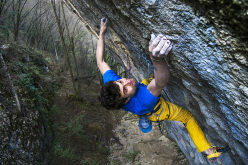 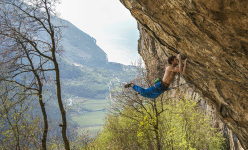 Silvio Reffo, the 9a climbing physiotherapist

Interview with Italian rock climber Silvio Reffo who at Misja Pec in Slovenia sent his 10th 9a sports climb.

Last weekend at Misja Pec in Slovenia Silvio Reffo managed to repeat Sansjki par extension, upping his "tally" of 9a sport climbs to an impressive 10. This is a remarkable amount, especially if you consider the fact that, in addition to being an athlete, the climber from Vicenza works full-time as a physiotherapist.

Silvio, 10 top routes...
Yeah, ten 9a’s, some slightly easier, others a bit harder, but all with their own individual story and many wonderful days climbing with friends and Francesca. I’m beginning to run out of cutting-edge routes close to home, but luckily there are still plenty of challenges within about an hour or two. And then I've always got a drill, to bolt something new!

You work as a physiotherapist, what did you specialise in?
I deal exclusively with musculoskeletal problems. I’m attending refresher and master courses, specialising in manual therapy. I’m particularly interested in the shoulder and spine region.

Presumably you have plenty of patients who are climbers...
Yes, a fair few. The biggest mistake climbers make is that they’re not gradual with their exercises, with the type of holds they use and above all the load and intensity. Bodies need to be trained to train, and it’s important to work on the opposing muscle groups and compensate for postural problems.

Your job is your second love?
Actually I love my job just as much as my climbing, so the time spent working certainly doesn’t feel like a "sacrifice" away from the crag. The main problem I have is that I’ve got little time to spare, but lucky I can organise my own workload. As a physio - and thanks to my sponsors - I can manage my appointments and carve out the time I need for my climbing. There are of course periods throughout the year when I’m really busy, such as in the run-up to Christmas when I was working for 12 hours nonstop. But these intense periods then balance out with less stressful moments throughout the rest of the year. What never changes though is my motivation. I’m extremely consistent and even after a hard day's work I try to the gym. I really try to make the most of my time, even during breaks between one patients and the next...

So how’s your week structured?
With few exceptions I manage to train every day. On Monday morning I start with a bouldering session; I start work in the late morning and continue without stopping to 20:00. In the evening maybe I do a few stamina circuits. On Tuesday night I go to the King Rock climbing wall in Verona, on Wednesday I spend an hour in the morning doing other training (campus board, pull-ups, etc.) and then work until evening. On Thursday I work in the morning and in the afternoon in spring and autumn I then go climbing in Arco or at other crags. On Friday I take a rest from climbing but work all day as a physio, and at the weekends we pack the van and hit the road…

You climb daily, presumably though your training is focused primarily on quality ...
What certainly counts more that the quantity is the actual quality. Apart from endurance training, which requires a lot of time, for pure power and power and endurance you can do a lot with just two hours a day.

After having redpointed ten 9a’s... what do you need to send 9a+? And 9b?
9a+ is definitely a difficulty I can’t send with a "limited" number of attempts. In March I’d like to return to Spain and deal with some unfinished business and climb a route of this difficulty. Unfortunately I don’t have any routes this hard closer to home, I’d have to travel a fair bit and for this I’d need more time. As to 9b… maybe I could lay my hands on Lapsus at Andonno, having already climbed Noia, the lower section of Stefano Ghisolfi’s super testpiece. In the meantime though I’d like to get stronger as I’m lacking the power I need to send routes of this difficulty.

We remember you as a promising 16-year-old at Lumignano back in 2007, in 2012 you then redpointed your first 9a. How has your climbing changed over time?
Over the years it's undoubtedly changed considerably. Until a few years ago I was motivated by trying to send hard routes onsight or flash, now I’m inspired by trying extreme routes in the fewest attempts possible and ideally in a day. So who knows, maybe one day I’ll manage to send 9a in a day!