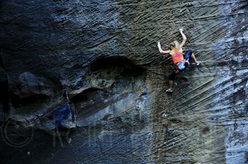 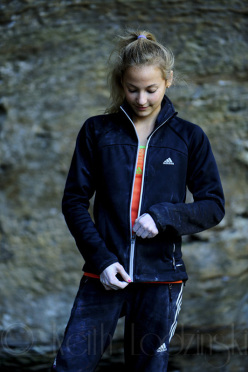 Interview with American climber Sasha DiGiulian after her ascent of Pure Imagination 9a at Red River Gorge, USA.

Pure imagination. The name couldn't be more apt for American climber Sasha DiGiulian, who on 11 Ocotber sent this, her hardest route yet. The route is located at the Red River Gorge and weighs in at a mighty 9a and in sending the line DiGiulian becomes the first American woman, and the third in the world, to send this magic number. The first to enter this sphere was Spanish climber Josune Bereziartu who set the ball rolling almost a decade ago by climbing the ultra-technical Bain de Sang in Switzerland, while this August Frenchwoman Charlotte Durif sent Les 3 P in the Verdon Gorge. A fact which, for the record, was questioned in some forum (unfortunately she declined to comment to Planetmountain) but which, until proven otherwise, obviously stands.

DiGiulian's progression to 9a is truly astounding: in March this year she sent her first 8c+ (Southern Smoke at the Red River Gorge) and immediately consolidated this grade by sending nearby Lucifer. If anyone had doubts as to whether she might have specialised at one particular crag only, they were proved wrong early in September when she sent her third 8c+, Cosi Fan Tutte at Rodellar in Spain. And now, seven months down the line and with a series of astounding 8b+ on-sights under her belt, she upped her ante to 9a.

Professional photographer Keith Ladzinski, who has been photographing climbers for a decade, was at hand filming the entire ascent and told us: "Sasha's first try on the route left me amazed, she worked out all the moves and made short links to the anchors. It was pretty evident that she would be able to do the climb, it was more a question of when. She gave it 2 burns a day, and on day 3 fired it on her last go. It was amazing to see, she fought up the route in a dead silent forest, it was pretty surreal. Andy Mann and I were rolling video trying to keep quiet, it was intense running the camera and seeing her make history. Really psyched for Sasha, she's incredibly talented and this looks like only the beginning for a soon to be 9a spree."


Sasha, tell us about your road to Pure Imagination
The Red is the most accessible area to me because it's reasonably close to home, so it's where I've spent the most time. I chose this route for several reasons. For starters, I thought this was going to be a longer-term project than it turned out to be, so having an accessible project made it an obvious choice. Also, there is something special about doing your hardest route in your own country. Another reason is that I watched the video produced by Andy Mann of Jonathan Siegrist climbing the route and it looked like a really beautiful line. I love the Red River Gorge and was excited to journey to Kentucky and to try it out!

What type of route is it?
Pure Imagination is an 80 foot, slightly overhanging climb that has three crux sections separated by continuous, on-edge climbing with few rests. It's a beautiful line, established by Siegrist last year and it received its second ascent by Adam Taylor this spring. The holds are sharp and very small, but despite the skin-battle, the climb is amazingly fun and aesthetic.

Six goes only. Surely there is room for more.
Pure Imagination was hands-down the hardest climb I’ve ever been on. I did all the moves my first go up the route, but I knew it would be a challenge to accomplish it in a one send-burn. It involves a lot of resistance, power, and mental focus, so this was really cool for me to experience. Climbing constantly on-edge, I guess, was my favourite part – really trying hard!

You sent your first 8c+ in March. Did you expect to make the massive leap from 8c+ to 9a so quickly?
No. I approached this climb with an open mind. I’ve never donated a lot of time to a certain climb, and I thought that this climb would take much longer than it actually ended up taking, so this was a little surprising to me! Andy Mann and Keith Ladzinski filmed every effort I had on the climb, from my initial arrival to the area, my first try, to my send. This footage will be coming out in an upcoming video, so stay tuned!

What next?
Well hopefully this isn’t the last… I don’t need time to recover and am motivated to try more! There are so many destinations I’d like to explore and experience, but now I’m off to Asia for my first time for the Petzl RocTrip!

Last question: female 9a was first breached in 2002 by Josune Bereziartu
I have never met her, but according to her record she must be very strong and an inspiring woman to learn from! As for climbing 9a, I am proud to have accomplished this grade and I hope that it inspires more women to climb 9a as well.