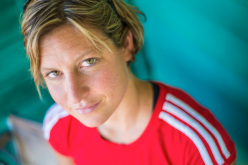 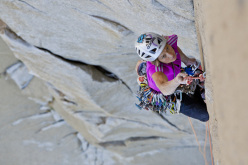 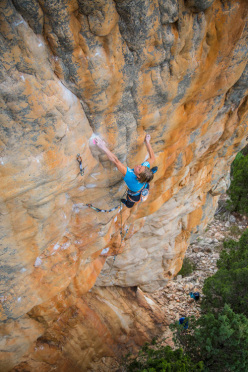 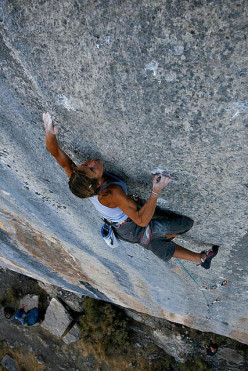 Interview with New Zealand rock climber Mayan Smith-Gobat. Her ascent of Punks in the Gym at Arapiles, the Salathé Wall on El Capitan, the Nose Speed and more...

Mayan Smith-Gobat is certainly one of the world's leading rock climbers. The 33-year-old from Christchurch excels in almost all fields, from hard trad routes and sport climbs up to F8c, to long multi-pitches such as Donnafugata in the Dolomites and the route which first propelled her into the international limelight, her inspirational ascent of the Salathé Wall on El Capitan, coming after months of effort spread out over a couple of years, often alone high up on that airy headwall almost 1000m above the valley. It was in Yosemite that this autumn Smith-Gobat shattered the previous speed record of The Nose and while this ascent was no doubt awesome, it somehow overshadowed an even greater achievement: the race up El Cap and Half Dome in under 24 hours. Smith-Gobat's decade long quest, to delve into the past extremes in order to push her current limits, is driven by innate talent and stubborn determination and one thing is clear: given time and patience, much more is in store in the future.

Mayan, tell us about your beginnings
I first started with alpine climbing when I was 15/16 and pursued this for a year around Mt. Cook, the highest mountain in NZ. The following year I switched to sport climbing because I was too impatient to wait for the right weather conditions in the mountains. I immediately fell in love with the challenge of moving over stone. So I learnt to climb outdoors, mainly at the small local crags and boulders around Mt.Cook and Lake Taupo and did not climb indoors until much later. Then when I left school I became side-tracked by skiing - I followed winters around the world and barely climbed for a couple of years... until a skiing accident turned my attention back to climbing. I was 21 at the time and since then climbing has been the most important aspect of my life.

It was then that you visited Australia's Arapiles
Yes, this was the first place I ever went on a climbing trip, so it holds a special place in my heart.

You recently repeated Punks in the gym... what does this represent to you?
The first 8b+ in the world, first climbed by Wolfgang Gülich in 1985 and one of the most famous routes in the world. Still known as a world class test-piece... Which had not seen a female ascent until recently!

Before that you raced up The Nose in Yosemite. What's the attraction?
Speed records are not something I had ever really thought of pursuing... I first started thinking about doing it when the women’s record was 12 hours, basically because I felt that this was almost an embarrassment to us. Then two good friends of mine brought the record down to 10 hours and 40 minutes (Libby Sauter and Chantel Astorga, Editor's note). Half a year later a couple other women joined the game and broke their record by 20 minutes (Jes Meiris and Quinn Brett, Editor's note). The race had begun... I knew that I could still break this record without investing too much time into it. So, I decided to and in the process I realised that it is actually a really fun way to climb big walls!

How much did you risk?
I did not risk much, or lets say I took calculated risks. With Chantel we short-fixed; this is an effective way of enabling both people to move simultaneously, without actually both having to climb at the same time - simul-climbing. To short-fix the leader climbs a pitch, clips in, pulls up all the slack rope and fixes it to the anchor. Then the second can proceed to jumar the rope, while the leader starts leading the next pitch, on what is often refereed to as :the death loop". If the leader falls at this point, it would be very unpleasant, as there is often a huge amount of rope just sitting at the anchor. However, this way at least as the leader you are only reliant on yourself, while if you are simul-climbing, if the second falls it would be very bad for the leader. Simul-climbing is definitely the fastest method, but also the most committing and both people have to of very similar levels of climbing and have total trust in each others abilities. This is how I climbed The Nose in 4.29 together with Sean Leary a few days later, we simul climbed the whole route.

Interested in taking up this challenge again?
Yes, improvements could be made everywhere - with each run I know the route better and can therefore move faster and more efficiently. Less blocks, faster change overs... etc. I could potentially be interested in doing a few more runs up the Nose - it's a lot of fun and there's a lot of room for improvement!

After speeding up El Cap the two of you also raced up Half Dome in under 24 hours… in some ways this flew under the international radar. How do you rate this personally?
It is a little unfortunate that this did not get recognised a little more. As far as we know, ours was also the first female ascent of this linkup. And a significant achievement for both Chantel and myself... Actually, this was more important to us than breaking the Nose record!

So tell us more
To achieve this goal there was much more involved than simply being fit and strong. We needed to work well together, trust and motivate each other, even when we were totally exhausted, and to preplan everything. Simply making sure we had all the necessary food and water for the different stages of the day was a logistical nightmare... and a key to success! Also, a huge amount of mental grit and determination is required to you keep going for this amount of time without a break, when your body is exhausted and screaming at you to stop.

Success on the Salathè came about thanks to this determination and grit. Tell us about those moments all alone working the route… And about the ascent with Sean Villanueva...
The time I spent alone up on the headwall was amazing... both extremely difficult and really rewarding at the same time. I loved being up there on my own, but finding the drive to keep trying with no one else to help motivate me was vey hard at times. I had strong feeling and belief that I could do the Salathe very early on - basically as soon as I worked out all the moves on the headwall. However, it only sunk in to my consciousness that I could do it after linking the entire Headwall on mini-traxion... I was thrilled. I remember collapsing on Long Ledge (at the top of the headwall) in sheer exhaustion and relief! My free ascent with Sean was a blast, he's a great person to be on the wall with - strong, always positive and with a great assortment of flutes, he kept everyone on the wall entertained!

You excel in many areas of climbing. Which motivates you most and why?
Most of all I am motivated by the challenge of piecing together a climb - interesting moves, the mental challenge and achieving something which previously seemed impossible... Basically difficult climbing! The aesthetic beauty of a climb also means a lot to me - the line! I love big wall climbing because of the exposure and beauty of being up on those faces, coupled with the additional challenge of climbing multiple difficult pitches in a row. But I love mixing this up with sport climbing because of being able to focus purely on the physical moves. And bouldering is also a lot of fun, but I do tend to be drawn towards the highballs, again, because of the striking lines.

What describes you best: nerves or fingers steel?
Both! My strengths are my fingers, technical climbing on not super steep terrain, my mental strength and stubborn determination to not give up! Having said that, my weaknesses are power and dynamic moves!

What can we look forward to in the future?
I will definitely not be in NZ much... Though there is some great climbing in NZ, there not very much at a high level. At this stage it is important for me to be in a bigger scene. I'd like to see more amazing parts of the world, avoid injury and keep pushing my limits! I have a huge amount of goals and ideas... Currently I am focusing on training, as this is something I have never done before and power is my weakness. Then in 2013 two of my main goals are to try "Just Do It" at Smith Rocks and to free the Nose.