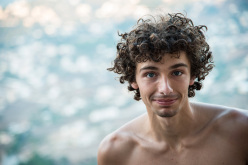 Jacopo Larcher at Kalymnos
Photo by The North Face®/Riky Felderer 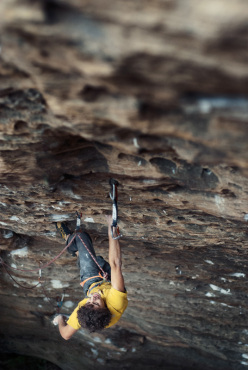 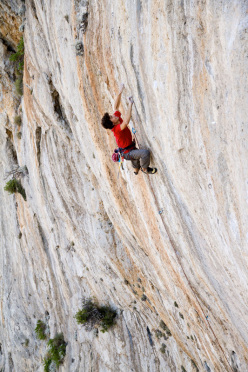 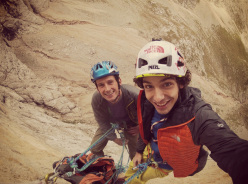 PORTFOLIO / gallery Portfolio: Jacopo Larcher and his 9a climbing at Red River Gorge

Jacopo Larcher and his 9a climbing at Red River Gorge

Interview with the young Italian climber Jacopo Larcher, touching on the Red River Gorge, the Kalymnos Climbing Festival, the Dolomites and much more.

A few weeks ago he managed to send his first 9a in the Red River Gorge. A dream which many harbour, an extraordinary feat reserved to the few, which came true for Jacopo Larcher almost accidentally, after a long finger injury and months of route setting for climbing competitions. And for the The North Face Kalymnos Climbing Festival, where his behind the scenes work with Simone Moro was fundamental. But as everyone knows, 9a doesn't come about by chance and after 10 years of intense climbing the 23-year-old has amassed a series of great climbs of titles, such as 2010 Italian bouldering champion and his 8b+ flash at Siurana in Spain.
Along with his partner Melissa Le Nevé, Jacopo took advantage of those mid-November days when the strongest in the world had gathered in Kentucky to defy gravity and it was exactly then that he successfully redpointed Southern Smoke Direct. As we mentioned, his first 9a, an absolutely superb performance. But a moment which he, given his age and love for this sport, prefers to interpret as "this more as a starting point than having achieved a goal."

Let's start with the Red River Gorge. We've heard it's an absolutely lovely place!
Ever since I started climbing I've always dreamt of going there: leafing through the magazines at the gym I was always taken aback by the colours and shapes of the rock, I was intrigued and fascinated. And now, more than ten years alter, this dream has finally come true and I have to say that I wasn't in the least disappointed! The climbs and the rock are simply amazing! And the potential for new stuff seems endless! The only flaw is the rest days, when you're not climbing since the surrounding areas aren't all too interesting...

This year it seemed as if an impressive group of some of the best climbers in the world met at the crag. Tell us about the atmosphere that could be felt during those days.
Yes, this autumn it really did seem as if all the best climbers had had the same idea. The atmosphere at the crag was both very relaxed and motivating, we exchanged tips and cheered each other on and this gave rise to a good feeling of emulation. It was very interesting for me to see the different styles of climbing and everyone's personal approach: you can always learn something form someone else and I returned home feeling enriched by this experience.

As it happened, you also sent your first 9a. Did you realise immediately that it was feasible?
Yes, this trip was quite productive. Honestly though, I didn't go there with any particular route in mind, I simply tried to make the most of my time there, enjoying the Gorge as much as possible. I certainly didn't want to spend too much time on just one single route... and luckily I managed to send it pretty quickly! In truth, at first I didn't like the look of Southern Smoke Direct, but seeing that Melissa was trying the normal start and I had already sent the two classics there (Fifty words for pump and Southern Smoke), I decided to take a closer look. I realised that I could do it quickly so I put in the effort to make the send. After two days of attempts at the boulder start I I finally stuck the difficult move and continued up to the chain. It was a beautiful day as Melissa also sent her Southern Smoke "project"! Honestly, I see this more as a starting point than having achieved a goal. Recently I haven't had much time to climb and train and the fact that I sent it so quickly is positive for the future.

Melissa was exceptional, too. Will you return?
Yes she was... it was a great trip for her as well. And we'll definitely be back. "Unfortunately" we both left Red River with a bitter aftertaste: Melissa fell off the end of Lucifer countless times while I fell off the last hard move of Golden Ticket on my second attempt... and then I had to leave. But apart from these two, there are still hundreds of routes I want to climb and there are also loads of cracks, next time i'll certainly bring my trad rack! And... a drill; I've already spotted various lines that I'd like to bolt.

Speaking of exceptional things, during your trip there was also the world's first 9a flash. Were you there when Adam Ondra was up to his usual tricks?
Unfortunately we weren't there, but we heard the screams all the way to sector where we were climbing. We then spoke to those who'd been there and they told us it was a really cool moment! We were lucky enough to witness his onsight of Golden Ticket: I'd already watched Adam climb but every time I see him I'm surprised of his ability to concentrate, to be focused 100% on what he does. And every time he climbs, he always manages to go right to his very limit. When he climbs he's ET, but as soon as he's back on the ground he's a really nice guy, helpful and humble. There's a lot to learn from him, and not only from his climbing!

You went to Red River Gorge after having invested much time setting route for the TNF Kalymnos Climbing Festival.
Yes that's right. This year I've had very little free time, I've always been fairly "overbooked" between setting comps and bolting new route... for one reason or another, most of summer was spent with a drill in hand. Preparing the festival required a lot of energy but it was also really satisfying. Bolting the new crag together with Simone Moro was a real honour even if it took a lot of time because of our various commitments which meant that we could never spend more than a week in a row on the island. The last days before the event were really intense, in August it gets really hot and so we had to leave before dawn to prepare the approaches, bolt and clean the routes. We never had any time to spare! Bolting the crag was only a tiny part of all the work that went into the Festival: the event's success is due to a very close-knit team that worked hard for months to create everything! Everyone who took part in the organisation gave their body and soul to create a great event, so it's fairly normal that we felt under pressure as the date approached. Yeah, the days in the run-up to the festival quite stressful, but having seen the smiles on everyone’s faces, I have to say it all worked out! This is definitely the best reward you one get for all our effort. Apart from the festival itself though, I was really pleased to have been given the chance to contribute to the development of this climbing paradise and I'd like to take this opportunity to thank all those who, worldwide, have bolted routes and continue to do so, because without them our sport wouldn't be possible. So thanks!

This year, you also found the time for a quick stop off in the Dolomites. In particular you climbed the famous Via Italia '61 up Piz Ciavazes...
I always need new ideas and I like to dabble in all aspect of climbing. I've always loved the mountains and aspired to climb them, but in the past I've focused almost exclusively on competitions so there hasn't been much time for anything else. But after several injuries and some misunderstanding with the Italian sports climbing federation, I've now got more time to focus on climbing in the mountains. And in truth, I'd like to spend more and more time there! After I'd finished route setting I spent 5 days doing multi-pitches and while Via Italia wasn't the only route I climbed, it was definitely the most important one. I don't know why, but ever since I was a child I've always admired this line. I still remember when Bubu first freed it, I kept reading the articles, looking fearfully at the photos of the massive roof and the thought of climbing it one day seemed impossible! So now, many years later, I finally decided to try this "whim" and I have to say that I really enjoyed it from start to finish. Although not extreme, it was undoubtedly highly satisfying experience.

Before the Dolomites you travelled to Rocklands together with Melissa. Once again it seemed as everyone had gathered in the same place this winter...
Yes, this year we haven't spent much time at home! Last year we were enchanted by South Africa and so we decided to return again this summer: up to now it's by far the most beautiful place I've ever seen ... I think I could spend my whole life there! We spent the whole month of June there, this time we tried to visit many more areas, exploring new sectors and boulders. We walked a lto and managed to find some nice clean lines ( not just in Rocklands itself). It really was a beautiful experience: in the beginning there weren't that many people and we had the chance to meet the real locals and become friends, we shared many great moments and these are the most beautiful memories we have of that trip. Tthere is a tremendous potential for new routes in South Africa, everywhere there are huge unexplored areas of boulders and rock faces. I'm not planning to go back this year as I have many other projects, but I'll be back very soon... maybe not with a crash pad!