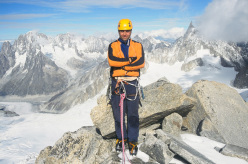 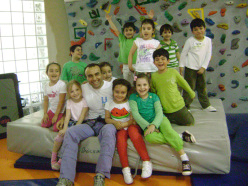 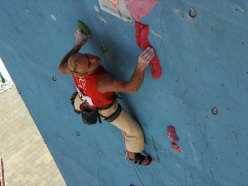 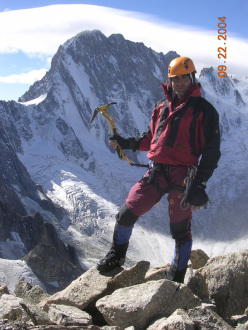 Maurizio Oviglia interviews Dogan Palut, one of the most talented and famous climbers in Turkey.

Dogan Palut is not only one of Turkey’s most talented climbers, he is above one of the most charismatic. Considering the ease with which he switches from indoor competition climbs to massive alpine outings and even the Himalaya, he has earned the respect and is held in high regard by most Turkish climbers. I met Palut during my second visit to Turkey. He was one of the first to repeat our routes and our esteem is mutual.


Hi Dogan, you are one of the most respected and most experienced Turkish climbers. Tell us about how it all began and about your life as a climber.
I started climbing in the Ballıkayalar climbing area situated on the border between Istanbul and Kocaeli. Between 1989 and 1993 I mainly bouldered and top roped but I also found the time to climb quite a few trad routes. At the same time I took part in some courses organised by Yildiz University Mountaineering Club and I tried to improve in the mountains of Uludag, Hasandagi, Aladaglar etc. In 1994, under the guidance of two climbers originally from Istanbul, namely Emre Altoparlak and Batur Kuruz, I started climbing some technical trad alpine routes in Aladaglar. That same year I established some new routes at Ballikayalar and from 1996 onwards I established numerous sport climbs and my  technical level improved from VI+ (6a) o X (8b). I should also mention that between 1996 and 2012 I explored several new climbing areas in Turkey and Cyprus and established more than 600 routes.
All this activity and progress obviously helped me a lot in making first repeats and first ascents in the mountains.
Climbing competitions began on a national scale in 2000 and thanks to my bouldering and lead results I qualified to take part in international competitions.
So from technical routes on the bare rock faces of the Toros Mountains and the mixed outings up Uludag in winter conditions I also shifted my interest to climb some routes in the Western Alps. Furthermore, I’ve also done some high altitude climbing in the Caucassus and the Himalaya.

You certainly know much about Europe’s rock climbing history in. What can you tell us about the climbing development in your country?
The climbs carried out by Western European mountaineers in the mountains of Anatolia (and especially on Aladaglar) during the 1930’s and their free ascents – so without the use of aid – and their alpine approaches really impressed me. When my friends and I repeated these routes we really grasped this spirit and I suggested this should become the school of thought for Turkish climbers, too. Put in brief: pure alpine style, with minimum support, relying on your own efforts. The routes established by these climbers from Austria, Italy, England and other countries gave us a direction and also helped establish a form of cooperation. Of course one mustn’t forget the French climbing guides Denis Condevaux and Pascal Duverney who established a series of classic climbs in Aladaglar between 1993 and 1996. When we repeated these routes we were confronted with surprising difficulties in relation to other classic face climbs (Parmakkaya and Trango/Guvercinlik alpine sport routes).  Other names are worth mentioning, too, such as Walter Pleunigg, H. Peck, R. Hodgkin, Hermann Köllensperger, Nino Corsi, Rick Jamieson, Maurizio Perotti and many more. They all deserve our very generous thank you for having been such an impressive source of imagination for all of us Turkish climbers. This relationship continues today as you, Rolando Larcher and friends continue to add new routes which touch upon these limits.

Tell us about the differences between modern sport climbing in Turkey in comparison with other countries you have visited?
I think because we started later than the rest of Europe we began by using better equipment, which meant that routes were well-equipped right from the outset. So this invariably led to fewer debates…
With regards to climbing competitions, the current situation isn’t that great, we are practically ‘outclassed‘ due to our European league ranking. I believe the federation lacks foresight, we still have a long way to go and it would help were more climbers to become actively involved in this process.

I know that you have also been involved in training, competitions, organisation of events. Could you give us a brief identikit of the new generation Turkish climbers? Are they more attracted to indoor climbing or outdoors?
As you have suggested, yes, most prefer climbing on indoor walls even though climbing in the mountains is gradually gaining popularity. But we are still far behind the rest of Europe and the number of those taking to the mountains is low. It‘s worth bearing in mind that the rate of urbanization in Turkey has tipped the balance and I believe this could be key: industrialization and man escaping from the city!
Mountaineering, I think, will always play a marginal role, mainly because sports climbing and competitions are more concrete, more motivating and more “industrial”! I should also add that Europe’s mountains, the Alps with the golden age of alpinism, are off-limits to Turkish climbers who often have visa problems which are as insurmountable as some mountains themselves. In 2005 I wanted to climb the West Face of Grand Capucin but was blocked by the French consulate. So I chose to test myself on a tough route on Alam Kuh in Iran! Having said that, Turkey’s elite can easily deal with visa problems. In merging with the West, in particular Europe with whom we’ve gone hand in hand for ages, this creates a serious burden. Climbing is not independent from these political issues.

In Europe the Turkish sport crags - apart from those in Antalya - are not particularly famous. In your experience as guidebook writer, what are Turkey’s most interesting crags?
Unfortunately you are right about Antalya and the fact that only this is well-known! But this is directly related to tourism and apart from Cappadocia and Istanbul, Antalya with all its attractions is quite rightly very famous. It’s completely normal that Europeans seek the wonders of Antalya during winter as a cheap alternative to other countries. People who place climbing as the essence of their life often travel around the world and discover great areas which are not linked to passing fashions and the same holds true for Turkey. For instance, I remember Giovanni Guerici - who lost his life last year - visited Aladaglar and Anavarza for climbing and established numerous routes.
With regards to the crags, in general I believe that climbing in Turkey rapidly growing in popularity and it seems as if interest is currently shifting towards the western regions. The Bafa bouldering area and Kaynaklar in the Egean; Ballıkayalar, Geyve and Gölpazarı in the Maramara region are all strong candidates for important new climbing areas. But it is hard to compete with Geyikbayırı in terms of accommodation and it is proving impossible to receive support from the government as Thailand and Kalymnos do. Having said that, progress will continue -  admittedly at a slower pace - and guidebooks obviously play an important role in this development.
From the geographical point of view, Turkey is a climbing paradise. There are fantastic climbing areas such as Erzincan-Kemaliye, Nigde-Kazikli Ali, Eskisehir Karakayalar, Izmir Bafa. If I had to choose one area, all things considered, my favourite would be Bilecik-Golpazarı.

What do you think about the success of Kalymnos? Could Turkey obtain the same results?
It seems to me that apart from its positive impact, this success also has a negative aspect. Tourism is always attractive but climbing is an individual adventure. What attracts me personally is the relationship with mountaineering, powerful journeys, an independent spirit of exploration.
Having said that, I establish routes in such a way as to enable lots of people to come and an area’s success is also related to ease of access, accommodation and the surrounding environment. Here in Turkey we have Olympos and Geyikbayiri that are similar to Kalymnos and in terms of infrastructure and number of routes I’d say the gap has been filled.
Personally though I’m more in favour of a “Cittaslow” style, where areas retain their unique identities! You know, what is in fashion today tends to become obsolete after a while!

Apart from being a good sport climber, you are also an excellent alpinist. Which are Turkey’s most interesting mountains and which might be surprising in the future?
Hard, technical multi-pitch alpine sport routes seem to be shaping the future in Turkey’s mountains and these are filled with countless big limestone walls. Especially the eastern side of Aladaglar, namely the Vay-Vay Torasan region, is relatively untouched. Eastern Anatolia and the Hakkari mountains, comprise of the Cilolar and Sat ranges visited by Doug Scott in the 70's and also the Munzur Mountains all hold extremely original, untouched rock faces, but at present these places are almost completely closed for climbing. I sincerely hope the "Kurdish problem" will be solved as soon as possible and that, along with ensuing peace, we might be able to climb in these regions.

What place do climbing and sport in general hold in your country? And what are your dreams for the future?
Turkey has two facets; one which looks to the West, the other to the East. In that sense it is unique. One side is European, the other is Eastern, and this combination also includes oriental characteristics. Although sport in general is not viewed as positively as it is in Western Europe, as a result of urbanization and increased wealth it has increased in value. As the number of climbing areas has increased, more and more guidebooks have been published, more people have become interested in climbing and development has progressed.
Of course my dreams are all focussed in this direction: to have more climbing areas with good, well-bolted routes and more and more people climbing and actively involved in this process. I’ve always worked towards this. All my new routes, my climbing abroad to gain experience and friendships, have all been geared towards fostering the climbing development in my own country.