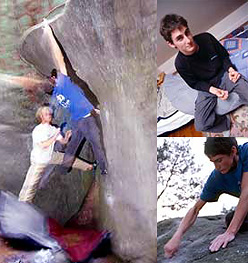 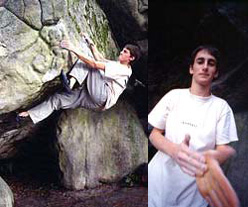 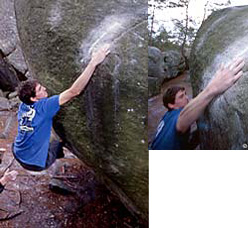 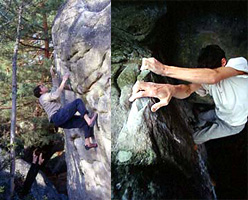 Climbing in America and bouldering at Fontanebleau with Dave Graham.

Al Maxximo
We’d agreed to meet the next day, so on Friday I went to look at the magnificent boulders at the “Cul du Chien”, the magnificent ham-shaped boulder stuck in the sand, to then walk round to the roof and “the other roof” and who do I meet? Dave Graham, the man himself, trying to link the futuristic “Into the maxx”. While “The maxx” is a hard 8a+ that starts from a hold halfway through the roof, Dave was attempting to reach this by starting right at the back of the roof. The moves are hard and require excellent footwork, making use of all heelhooks available. At the end of the day he’s trashed the tops of his shoes and his finger joints covered in blood. To date the boulder problem hasn’t been climbed – how about another trip to Europe Dave?


Portrait
Born in 1981 in Maine, one of the flattest states in the U.S.A., Dave Graham started to climb in 1997 with a friend from his skiing team. “He climbed already and asked me if I wanted to go to the local wall. For two weeks I went back there every day. I immediately realised that I really liked climbing. Then my friends began to tell me that I was good - after two months I climbed my first 5.12a, five months later I climbed my first 5.13a and after a year I climbed 5.14a, at which point I too began to think that I was quite strong.”

In just four years Dave became one of the strongest climbers in the U.S., and has now climbed 26 routes between 8b+ and 9a. These include “Hasta la Vista “ 8c/8c+, “To bolt or not to be” 8b+, “Facile” 8b+ and “The Fly” 9a. Dave is perhaps the prototype of the new climber: a result of indoor walls, super-gifted, hyper-motivated and already capable of passing where the new generation has found its limits.

“When I started I only bouldered, because I didn’t know how to use a rope and because boulders are the closest thing to home, two hours away. Then I learnt how to place nuts and friends so I began to take up traditional climbing. It was only after this that I took up sport climbing. But bouldering still remains my favourite activity, only in this form do I manage to express myself fully. In fact, the hardest things I’ve climbed are either boulders or short, bouldery routes.”


Climbing in the States
“In the U.S. things work much like here in Europe, our federation isn’t very active and the state doesn’t do very much for climbers. Climbing for us is considered a pastime like skateboarding or videogames. It becomes really problematic when I have to explain to my teachers that I need a two week break to go climbing. Were I to go and play baseball instead, then that would be fine.

I manage to live off the money my sponsors give me (5.10, Prana, Pusher, Cordless, Sterling, Metolius), but only because I don’t buy anything extra, I manage to just get by. So that’s why now that I’ve finished school I’ll go to University. I’d like to do something like architecture or design. In any case I’d like to find a job and a course of studies that enable me to continue climbing. But climbing doesn’t get you points (students who take part in official sports get points for their University grades), so I’ll have to start playing baseball to earn some points.”


The Professionals
“It’s hard to establish who is a professional and who not. I know some amateurs who climb as much as professionals, or perhaps even more. And then there are loads of people who really think they’re something and, because they climb grades few others are capable of climbing, they fell legitimised to give their routes absurd grades. Before stating that one of my routes is 8c I really have to work hard to get it.”


Grades
“I can’t travel much, but there are entire crags in America which are overgraded by as much as a grade. Here at Fontainebleau I’ve received the confirmation that the grades I give, at least the boulders, correspond with those in Europe. There are many bouldering areas in America which are graded correctly, there are less errors than on the routes.

Before stating that “The Fly” is 9a I hesitated a lot and then I decided. It’s the only route which really cost me a lot, it’s definitely harder than all the rest that I have done. In the beginning when I first saw the line I thought that it was impossible . Then I started working it and everybody told me to stop wasting my time, but I knew I was capable of climbing it. It’s bouldery, about 18m long and at the end of it you have to get established above the roof. I also trained for one of the clips since it’s quite high and if you fall you can hurt yourself on the boulders below. When I tried the route I simply couldn’t fail.”


The Future
“I think that one will be able to climb 9b routes and 8c/8c+ boulder problems. It’s easier to find hard lines on routes - there are many projects that are feasible and many existing routes that can be extended to become a grade harder. Unfortunately the majority of hard routes are chipped or drilled. I’ve never chipped a hold. But I’ve repeated hard chipped routes and I think that this type of climbing is much less interesting than a natural line. One could perhaps climb past the hard section using a different method, but the person who freed the route didn’t even notice...

It’s different in bouldering , I think no hold chipping is universally accepted, even if unfortunately there are some sad exceptions. The problem with hard lines is finding them. I tried a boulder that might be 8c and another that could be 8c+ but I don’t know if I’ll be able to climb them. The hardest thing I’ve done until now is 8b+ with my “Nothing but Sunshine”. I repeated “The Mandala” quickly and I reckon it’s 8b - it is one of the nicest boulders that I’ve ever repeated.”


Pick -n-mix
“When I try something they tell me to rest more between one attempt and the next. But I don’t care, I like climbing and want to climb as I like to. Who cares if I feel wasted in the evening! Anyway, this hardly ever happens.

My favourite websites are those like Napster, where I can download music for free. I like rap and punk, even if America is infected by popunk bands that make me sick. I used to play the guitar in a punk band but now I don’t get round to it because I’m always out and about.

Here in Europe I can go into a bar and order a beer, but in the States the laws are really repressive and you can’t drink alcohol until you’re 21 and never on the street. I got drunk here - it was interesting because it was the first time, but it’s not something that I’ll get into. But at least I could try. What I don’t like is that one can smoke in bars and restaurants. I tried smoking but I didn’t like it. But after a day’s climbing at Fontainebleau we always finished off at the “Glasgow” - the people were really friendly and we made loads of friends.”


The Fantastic Four
Those who’ve been to Font know I’m not talking about the Marvel superheroes. I’m talking about “Big Boss’, “Tristesse”, “Big Golden” and “Fourmis Rouge”, the four pillars of this earth, four mythical problems on four enormous boulders that stand there, immobile, waiting for their next prey. Another being capable of climbing them, and they laugh heartily when, after a day of failed attempts, the human goes home empty-handed. But this time things went badly for them. “Conditions weren’t even excellent, it had rained all day previously, but when I stood beneath the problems I was full of energy. One after the other, gently, they all ceded”. They aren’t extreme, one is 7b+, another 7c and the other two 7c+, but it’s really hard to see all climbed on the same day.” This holds true also for the fantastic four, who by now are used to encountering the world’s best.

A hypothesis?
We’re at Bas Couvier, a type of opening with an enormous boulder stuck in the middle. Around us lies Fontainebleau’s history. Bas Couvier is to Fontainebleau as Rimini is to Itlay. Hyper-frequented, standardised, optimised but unlike Rimini it conserves its antique attraction. One doesn’t even have to search far to find its magnificent jewels, rounded crimps, huge slopers and pockets. Ideally suited to perfectly stimulate ones tendons. Dave has found his ideal warm-up. Four laps on “Coromaltese” 7a without stepping off, looping from the flat hold and descending on the left. A few laps on “Carnage” 7b, and then to complete the opera four or five times “Hipotese” 7c. Not only to warm-up but “because it’s a truly great problem, at the end of my trip I’ll have repeated it, I don’t know, more or less sixty times.”

C'Était Demain
“8a has already been flashed, although not at Fontainebleau. I was with my friends, we were searching for “Fatman” and I knew that nearby there were some hallowed problems, but I didn’t expect to find such a pure line. As soon as I saw it I wanted to try it, so I got ready. I didn’t need to warm up, I felt ready, so I put on my shoes, studied the line a bit and started. I immediately felt at one with the moves, it all came completely spontaneously. I really gave it all and put in a massive effort - I don’t think I’ve ever experienced anything like it. And I managed to send it. Fantastic.”

Karma
Dave tackled the legend of the forest on one of the last humid days of his trip. It rained, then stopped, started raining again, stopped once more and so on. POF had been placed above the last hold to stop it from getting wet. Humidity had reached 98%. The rock was green, the light was weak and there was no one around.

One unsuccessful attempt was followed by the next, Dave always slipped off the crux hold, by now he was trying more for fun than anything else. After a couple of hours trying he says” Right, that’s it, I’ll do it in better conditions next time.” So he takes off his shoes and goes far a walk. But he’s back soon and after a couple of attempts he states “Last go!”. It’s about the sixtieth time he says “last go!”, no one takes him seriously anymore but Dave reaches the intermediate, holds it, dynos for the sloper, sticks it, heelhooks , pulls himself up, continues to hold the sloper and… exits. Another 8a.