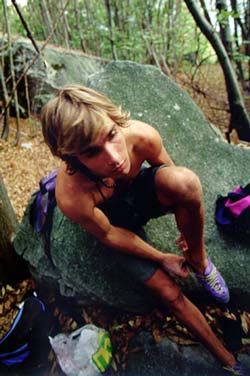 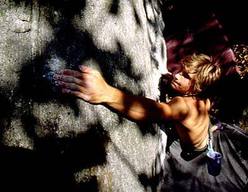 A day's bouldering with Chris Sharma in Switzerland

I met Chris Sharma at Arco during the Rock Master last year.…
I suggested we go bouldering and he immediately said yes. So that evening, right after the final, we left for Switzerland. We didn't have much time - the next day he had to catch the plane back home!

Chris really doesn't need much time to sort himself out.
Just after the alarm clock goes off we walk up to the first area. After a short warm-up of two 6bs, one 6c and a 7a he quickly brushes the holds and sits down beneath "La grotte des soupirs", 8a. A couple of seconds later he pulls off the sit-down start, reaches the hold in the middle of the roof, controls the barn-door and dynos, with a shout, to a small crimp and climbs effortlessly to the top. We haven't even had breakfast yet!

We then move on to Chironico
where a bunch of friends are waiting for us. We warm up again on some 6bs and 6cs - no problem once again. Then Chris tries an overhanging arete, given 7c+\8a. He checks out the holds and sets off. There's a strange move, a sideways dyno to a poor hold, and he falls. A short rest, then off he goes on his second try: unbelievable dyno! Literally bouncing from one hold to the next, he reaches the top!

We then try all possible variations of a 6b dyno.
He does it immediately (surprised?), so he tries a two-handed version. Yeah, this is fun, isn't it! And while Simone is still stuck on the first variation, Chris tries it one-handed. Starting hold, finishing hold, get established on top. "I like this game!" After this we get back down to business, and Chris manages a 7b+/7c dyno, after only 6 goes...

We need a short rest, so we move on.
I show him the best boulders on offer and then we start again with some fancy 6c footwork and a powerful 7c.

It's time to try something hard.
He tries a project, and in a couple of hours he reaches my highpoint (if I'm anything to go by) six times, before falling off . The move is hard: a blind dyno to the lip of a roof, with a forearm grating fall if unsuccessful. Not worried about this in the slightest, Chris jumps but only just misses. He then gives up because he's beginning to leave a red mark on the slab below…

Chris Sharma is shy and reserved.
He's really, really good at dynos. If he likes a boulder, then he'll give the problems a go. He's spontaneous, drawn in by the beauty rather than the grade. And there are few boulders he doesn't like the look of.