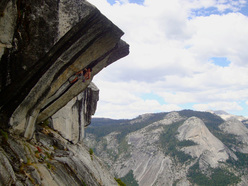 Alex Honnold on the Thank God Ledge, high up on the Regular Northwest Face route on Half Dome, Yosemite
Photo by www.senderfilms.com

Interview with American climber Alex Honnold after his recent solo ascents of Heaven, Alien and Cosmic Debris in Yosemite, USA

Straight out: this is a dangerous game. Perhaps, seeing what's at stake, it can't even be defined as such. What we're obviously talking about is free solos, those lone ascents which every now and then capture the imagination of climbers to the point of "monopolising" them som much taht eventually they finally make the send. Perhaps even decades after that first seed was sown. To tell the truth, every time we hear about certain ascents we're amazed, we squirm and suffer at the thought of where that "soloer" has pushed himself to. But this, too, is part of alpinism as a greater whole. So here we go...

Well what has Alex Honnold been up to this time? As we reported a few days ago, towards the end of September the 25-year-old from Sacramento went on a soloing spree in Yosemite Valley which resulted in, amongst others, Alien 7b and then three days later Cosmic Debris 8a and Heaven 7c on the same day.

7b, 7c and 8a solo. Perhaps at first glance this doesn't seem all too impressive. But if for a second you distance yourrselves from the grades, and we tell you that Alien is one of the most exposed cracks of all in the Valley. And that Cosmic Debris is a single pitch crackline which demands and requires maximum respect, then things change somewhat. And if we then add that Heaven was climbed flash; well, you begin to understand that this is something out of the ordinary.

Yes, Heaven flashed, without a rope. But what does this really mean?... Let's start by saying that this beautiful and extremely difficult crack which dominates Glacier Point was freed by none other than Ron Kauk and then famously soloed by Dean Potter... Well Honnold "sent" the route without checking it out previously and, importantly, without any hesitation whatsoever. Trusting the beta his friend Mason Earle had given him minutes beforehand... In short: as others have rightly pointed out, the dimension of this historic day of climbing defies belief.

While it might be argued that Honnold has made us accustomed to these feats - read his solos of The Phoenix, Sentinel, Regular NW Face on Half Dome, Astroman and The Rostrum in Yosemite, Moonlight Buttress in Zion, Gaia in the UK's Peak District - it has to be underlined that these climbs are all not merely world-class ascents, but out-of-this-world class ascents where the border between the fathomable and feasible is hazy and horrendously dangerous. And as always these ascents are, it goes without saying, not be emulated.

In this exclusive interview, 25-year-old Honnold sheds some light on his climbs and limits. Downplaying - in typical Honnold style - his achievements . It's easy to understand why he's nicknamed Alex "no bid deal" Honnold by his friends.


Alex, let's start with Cosmic Debris. What attracted you to this route?
Honestly, Cosmic isn't that nice of a line. It's not super exposed, it's sort of ugly looking, but it's one of the last hard single pitch cracks in the Valley that I hadn't soloed so it was on the list. Based solely on the grade given by the guide book it might be the hardest solo in the Valley, but I think having big fingers helps on the route. It felt really easy. It was definitely easier for me than the Phoenix.

Presumably you had climbed it before
Yes, I'd first climbed it years ago, and I rope soloed it again this season to work out all the moves

You then moved along to a route you'd never climbed previously, Heaven, which you flashed.
I had never considered this style before, but on our way to drive up there I thought about it and I got a little psyched. It's one of those things that once the idea occurs it's hard to shake. As soon as I thought "I should just flash it" I felt compelled.

A spur of the moment decision. Can you describe the ascent?
It went fine. I had really good beta from my friend Mason Earle. I think the whole thing probably took less than 5 minutes. Maybe less than 2. The route is only 40 ft tall or so. It's really short, but really steep.

Are there any routes where you say 'No, I'm never going to solo that'?
I don't think I have any set limit, I just know that some routes aren't for me right now. I don't tell myself "I'd never solo above 8a" since there might be just the right 8a that looks very appealing. But there are certainly tons of 6c's that I'd never want to solo because they aren't appealing or look sketchy or whatever else. Really it's a route by route decision.

Is there such a thing at your hardest solo ever?
It's hard to say, since it's tough to make the distinction between highballing and soloing. I did the boulder problem Ambrosia at the Buttermilks which is physically the hardest thing that I've "soloed". But I don't really think of that as soloing, even though it would have similar consequences if you fell.
I think Half Dome is one of my harder solos, just because of the exposure and the insecure nature of the climbing.

Can you remember how you got into soloing?
I'm not sure, I've just always been into it. I've always been interested so I've sort of sought it out. I just think it's cool.

Trad and sport, where does your heart lie?
I guess trad climbing is a little more satisfying just because I generally have to put more work into it, though I guess really satisfaction is directly tied to effort. So if a sport route takes a ton of effort then it's equally satisfying. I don't really prefer either style, they're just two different ways to get up a wall.

How important is new routing?
Well it's very important to the sport since we need things to climb, but personally I've never been very interested in developing new routes. I do from time to time, but I don't seek out first ascents like some people do. I don't really know why, but I've just never been drawn to it.

What are your views on alpinism in general?
As I get older I assume I'll go climb bigger and bigger mountains. But so far I haven't had much of an interest. I just don't want to go on an expedition for that long and be away from normal rock climbing. I love the day to day of going out cragging, it seems like a waste to sit in base camp for weeks just to get one shot at a huge face. But I'm sure I'll give it a try someday.

You're a pro climber. What does this means in practical terms.
Basically this means I go climbing every day. Actually, I guess the best way to describe it is that I'm a dirtbag climber with more responsibilities. I get to climb every day, but I have to answer email a lot more and occasionally go pose on routes and take photos and videos. And sometime fly to random places to make appearances and talk to people. There seem to be more demands on my time now. But at least I get to climb all the time and make a living.

We tend to only hear about your successes. Have you ever turned back from your climbs?
Of course. I've backed off tons of routes for many different reasons. Sometimes the rock seems bad, or I worry that I might be off route, or the weather gets bad. And sometimes I'm just not feeling it. Many years ago in Yosemite I was onsight soloing this multi-pitch 5.8 friction slab and I just decided I wasn't psyched anymore. I down-climbed, packed up my stuff, and hitchhike out of the Valley. I just knew I was done for the season, I didn't want to be there anymore.

Can you tell us about your fondest climbing memory
In truth I can't think of a specific one. Every once in a while I just get overwhelmed with happiness to be out climbing with friends. Actually, just two days ago I had a day like that. A friend and I were sport climbing up in Tuolumne Meadows. Just the two of us, crisp fall temps, no one around, beautiful scenery. I have days like that a fair amount. It just reminded me how much I love the whole climbing lifestyle.

27.09.2011
Alex Honnold solos in Yosemite
In Yosemite Alex Honnold has soled Cosmic Debris 8a, Heaven 7c and Alien 7b.