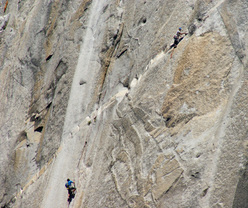 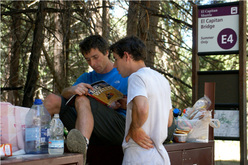 Alex Honnold and Sean Leary have climbed three routes on El Capitan in Yosemite, The Nose, Salathé Wall and Lurking Fear in 24 hours.

Alex Honnold, the young American who burst into the American and international limelight in 2007 and 2008 with his audacious solos in Yosemite and Zion, has returned to the "scene of the crime". Today's big news from across the pond is that Honnold has now climbed three routes on El Capitan, The Nose, Salathé Wall and Lurking Fear in a single day, together with climbing companion Sean Leary.

As Tom Evans reports, the two set off at 8pm for this triple link up, dispatching with the Nose in 4 hours and 15 minutes. After descending they climbing Salathé in just over 6 hours, before climbing Lurking Fear. Leading the routes in big blocks of two, the duo were seen eating pizza at 8pm on Curry Deck after having climbed 85 pitches and circa 2400m in 24 hours

This amazing bit of speed climbing (during which the climbers aid themselves by all means possible) comes about after some of Honnold's other recent sprints, such as The Regular Northwest Face on Half Dome and The Nose on El Capitan in less than 8 hours on 22 June and a first attempt at breaking Hans Florine and Yuji Hirayama's record of The Nose in May together with Swiss climber Ueli Steck.