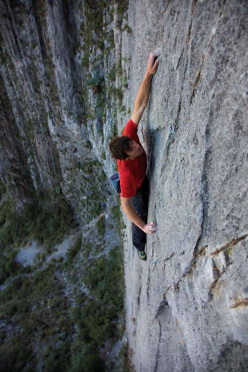 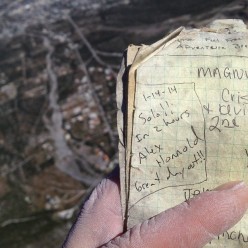 Last week it made headline news everywhere: on 14 January American rock climber Alex Honnold soloed El Sendero Luminoso, a 500m route up the Central Pillar of El Toro at Potrero Chico in Mexico. First ascended in 1994 by the Americans Jeff Jackson, Pete Peacock and Kurt Smith, the route offers difficulties up to 7b+ with decidedly technical climbing up tiny limestone crimps. After having cleaned and tried the route a few times, Honnold the soloed it in circa 3 hours and his is undoubtedly an "important" ascent.
Honnold has got us used to great solos - the Regular NW Route up Half Dome, The Phoenix or more recently the Yosemite Triple spring to mind - but apart from the difficulty, exposure and length of El Sendero Luminoso, perhaps what strikes most is that the route isn't on granite but limestone. "It's a very different style" Honnold explained, telling us here not only how it went but also that he hopes "to do something useful in the world besides just climbing rocks..."

Alex, tell us first of all how this solo came about?
Sendero is a bit of an iconic route - it's definitely THE line to climb in Potrero. I've known about it for a long time, and it's always been sort of the hardman technical route to do. I'd sort of fantasised about soloing it for years, and last year I'd actively wanted to try but the route was a bit dirty and none of my friends wanted to climb it more than once to help clean and prepare it. This year I came back with Cedar Wright knowing that we would put in the work and make it happen.

We read that before soloing it, you'd climbed it 4 times before...?
The first time I climbed it, 5 or 6 years ago, I just wanted to make it to the top. Then last year I considered the idea of soloing it, and it felt physically doable, but it just wasn't really in condition and I didn't feel comfortable. This year we climbed it again but we also cleaned some dirt and cactuses off the route. I was definitely planning on soloing it this year, conditions allowing. I was lucky that the weather cooperated and everything worked out.

The route is over 500m high. Where' the technical crux? And what's the hardest thing psychologically?
The technical cruxes for me were pitches 2, 5 and 11. Pitch 2 was definitely the psychological crux, just because it's down low and I wasn't super warmed up or in the groove yet. By the time I got to all the other climbing I felt super solid and everything felt easy. Pitch 2 is maybe a 5.12c boulder problem, super technical climbing with opposing side pulls and weird feet.

The route was originally graded 5.12d. To give us an idea about how much you're at your limit or in your "comfort zone" - what grade can you usually onsight and what's your hardest redpoint?
Well the route is probably more like 12b/c. It's really hard to say since you don't get pumped at all, it's just on your feet. I generally onsight 5.13a, and I've onsighted up to 5.13c or so. I haven't redpointed any hard sport climbing in a long time, but I've climbed up to 5.14c in the past. For comparison, I generally do a 12a or b as my first pitch of the day warm up. Basically, I felt quite comfortable.

Are there any places on the route where you can stop and think? Like on the enormous ledge of Half Dome?
There's a huge bivy ledge that splits the route at pitch 5 (but the first 5 pitches are all 50m, so it's actually halfway up the route). I took my shoes off for a minute to relax my toes. I would stop at the occasional good foothold and shake out, but for the most part I kept a very steady pace. There's also an awesome palm tree growing off one of the pitches that you can sit on. Classic Mexican climbing!

How does this compare, if at all, to your other of your solos?
It's something interesting and new for me. It's a very different style and it's quite technically hard, and it's really tall. It's not pumpy, so it's not much of a test of fitness. But it was a cool new challenge for me.

Also because, if we're not mistaken, most our other solos have been on granite
Well I've done a lot of soloing on sandstone too, but it's safe to say that most of my soloing is crack. This is definitely a completely different style for me. But it's the same kind of technical footwork that granite slabs require. And I really like climbing on limestone, even though I don't get to do it as much. But that 's just because there's no good limestone in the US.

On a completely different note: we know you recently started a foundation in your name.Can you tell us more about this?
Thanks for asking, this is a bit of a cool side project for me. The main thing that motivated me to start it was just a general feeling that I had more than I needed and that I should give back. I donate money through a charitable foundation (rather than just through personal checks) in the hope that it will inspire others to consider supporting causes that they believe in. Basically, the Honnold Foundation supports environmental projects that improve quality of life - anything that addresses both helping the environment and lifting people out of poverty. A good example is Solar Aid, a nonprofit we've been supporting that helps sell solar lights across Africa. It reduces the burning of kerosene lanterns, which is both good for the environment and more importantly, really good for the health of the consumers. Anyway, it's very much a work in progress, but I'm basically just hoping to do something useful in the world besides just climbing rocks...