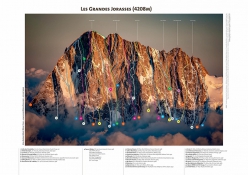 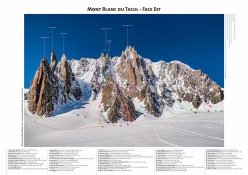 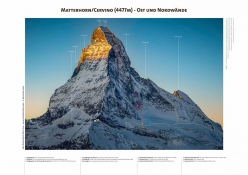 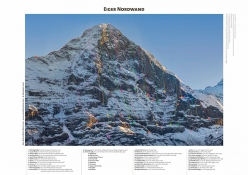 Last year during the COVID-19-induced lockdown French adventure photographer Alex Buisse embarked on a unique project: meticulously trace the lines of all the climbs on the Grandes Jorasses in order to produce a high quality poster. As a result of the unprecedented feedback Buisse launched his Mont Blanc Lines project and continued by helicopter, ultralight plane, paraglider, drone, on foot and on skis to capture the most famous mountains first in the Mont Blanc massif, then across the Alps and even as far as El Capitan in Yosemite. The result is a series of 35+ posters, downloadable free of charge in HD, that not only painstakingly record the hundreds of ascents that have been made of these mountains but also, through their explicit beauty, prove inspirational.

Alex how and why did this project come about?
It all started with the Covid lockdown of early 2020. All of a sudden, all my travel plans and photoshoots got cancelled, including shooting sport climbing at the Tokyo Olympics! I was desperate to go out and shoot, so when the Chamonix ultralight pilot Benoit Micolon asked me if I wanted to go do some aerial photography, I jumped at the opportunity. My intention was simply to capture some pretty landscapes, but I ended up with a number of good photos of some iconic faces, including the north faces of Les Droites and the Grandes Jorasses. I wanted to understand where precisely some of the classic routes go, so started drawing on them. When I put the results on social media, I was blown away by the response: people loved it and were asking for more. And I also got many, many requests for prints. So I decided this would be a very fun thing to keep doing, and it could be a nice side business while my regular photography jobs were still very slow. It took me a few weeks to set up a website and to work with a graphic designer, Julie Loomis, to release the initial 6 posters. There are now 36 posters with more on the way!

So the photos are taken from planes?
The initial photos were all aerial views from an ultralight plane, from three flights in May, July and October 2020. Since then, I have also done a lot of hiking and climbing to access some good viewpoints for other faces. Also, being in position at sunrise or sunset to have a good light usually means hiking up or down by night!

The work contains painstaking detail. How did you go about drawing the lines?
I have been collecting guidebooks for a long time now, so this is the perfect opportunity to put them to good use. I primarily rely on books, but also contact first ascensionists when I have doubts about particular lines, and do quite a bit of internet and archive research to make sure I have all the information. Most guidebooks are selections of the most classic lines, but a few try to be exhaustive, which are a wonderful resources. I use the Vallot guidebooks from the 1970s and “Snow, Ice and Mixed” by François Damilano the most. In fact, I don’t think Mont Blanc Lines would have been possible without Damilano’s books!

How long does it take?
Making a poster takes quite a while. The easiest are probably about 5-10 hours from start to finish (not including the time of taking the photos) but some more complicated ones, or if sources aren’t very good, can take multiple times that. And El Cap was in a class of its own, I have been working on it on and off for weeks before I was (mostly) satisfied with the result!

So what was the hardest thing of all?
When there are numerous routes that all cross each other, things can get very complicated very quickly. El Cap and Grand Capucin were the worst offenders in that category! It is also difficult when none of the sources agree with each other. If I can’t find anyone who has climbed the line, I end up having to make a judgment call. The most time I spent on a single line would be the Drus Traverse. I had three different guidebooks all with different information, and that south face is a big, big mess. What saved me was finding a rope team actually climbing the route when I photographed it, which at least helped locate the exit. Assuming they hadn’t gotten lost themselves ;-).

Did anything surprise you during this process?
I had some idea of how much work goes into making a guidebook, but now I have renewed admiration for their authors. It truly is a labor of love! The other thing that surprised me is how many fantastic looking lines have been completely forgotten about, and how many still remain to be established. I have a couple of ideas I must go explore myself, I think

Why did you decide to produce a HD download version? Surely that’s against your commercial interest?
I wanted to make the information easily accessible, especially as climbers are not always the wealthiest people. I tried to strike a balance between letting the lines and captions be visible but not letting people do their own large prints (or at least not at a high quality). I also ask people to respect the work by only using the files digitally and for their own use.

At the end of the day, it’s also about giving back to the climbing community. Not everything has to be about maximising profit!

Which mountain is next?
I have quite a few in the pipeline. I published Aiguille du Tour and am busy drawing Brévent and Pointes Lachenal at the moment, with Aiguille des Glaciers, Mont Blanc du Tacul and a giant panorama of all the Aiguilles Rouges also planned soon. After those, I will probably switch focus to the book I have planned with Glénat, scheduled for autumn 2021.

Ultimately, I want to go further than Chamonix. Once travel is possible again, I have grand plans of adding the last two north faces (Piz Badile and Cima Grande di Lavaredo), do all four ridges of the Matterhorn, more in the Dolomites, but also Verdon, Patagonia, Indian Creek, Squamish, Longs Peak, K2, Everest… There are many, many worthy mountains!

Earlier you mentioned El Cap
El Cap has always been very special to me. I spent months in Yosemite over the years and can’t wait for my next trip. I have also spent hours and hours looking up from El Cap Meadows, so it felt very logical to make an El Cap poster. I was also lucky that Erik Sloan made a wonderful guidebook which he just updated for 2020, so that was a solid source to draw from. The biggest challenge was how to fit the 106 routes I could see in a single image while keeping it somewhat understandable. The most surprising thing was how moderate and natural some of those lines look. I kept having to tell myself "no, remember, that is an A4+ pitch, it would take me 10 hours of sheer terror to (perhaps) manage to lead!"

What - through this work - is your wish?
I think above all, I want to inspire people. If people get one of my posters, look at it on their wall for a while, then go and climb one of the lines, it will be the biggest compliment they could possibly give me. I also want to pay my respects to both the first ascensionists and the mountains themselves, and maybe play a small role in keeping the records of all those fantastic ascents.

To browse the posters and download the free HD files check out www.montblanclines.com