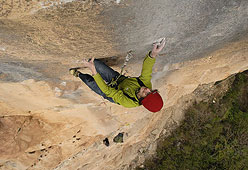 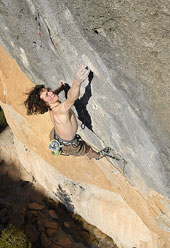 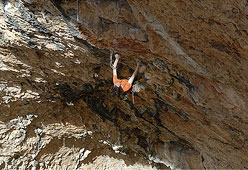 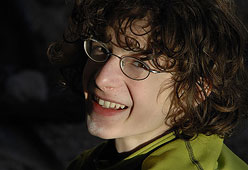 An in-depth interview with Adam Ondra, a mere 15 years old and already one of the most accomplished and talented sports climbers in the world.

15 year old Adam Ondra may well become climbing's answer to Sergei Bubka and pole-vaulting. The parallels seem clear and although Ondra has yet to leave his mark by breaking new ground, he is currently devouring existing routes at an unprecedented, mind-blowing rate.

His ascents this year alone are life-long achievements for most, with a recent 9a+ redpoint and 8c on-sight in Spain's Santa Linya and, importantly, a fifth go redpoint of the benchmark La Rambla 9a+ at Siurana.

In July 2007 he took the world by storm with his first-ever one-day ascent of the super technical multi-pitch Silbergeier 8b+, Rätikon, while just a few weeks ago he made headline news with his repeat of Dreamtime Fb8b+, probably the world's most famous boulder problem at Cresciano, Switzerland.

These achievements do not come about by chance and are, some might argue, simply the logical progression of a child who aged 11 was on-sighting 8a+ and redpointing 8c. But although standards have risen considerably, there is nothing simple about climbing 8c, let alone 9a+. Ondra undoubtedly heads the new power generation and in doing so obviously possesses something very unique indeed. We decided to find out more.


Adam Ondra interview
Adam, your list of ascents seems never-ending. Tell us more...
I obviously try to climb as much as possible outdoors, and I've always wanted to concentrate on both on-sighting and pinkpointing. If I want to try hard on-sights then I travel to southern Europe, since the routes there tend to be more stamina orientated.

Trying to criticise your climbing is like looking for a needle in a haystack, but if anything could be said, it would have been that you excel in sports climbing only, no bouldering. But after your recent repeat of Dreamtime, this is no longer the case.
I had wanted to go to Ticino for quite long time before this Easter, but in the past I've always decided to climb routes elsewhere. The weather forecast was miserable in Austria and Germany but good for the Ticino, so we decided to go. Dreamtime impressed me immediately. The night before I sent Dreamtime it snowed and then it melted. So I thought that conditions wouldn’t be good but the friction was great. I sent the standing variation 5th go and I found the lower part quite OK. But I fell about four times on the dyno. I took an hour’s rest, on the next try I almost had that hold, another 30 minute rest and Dreamtime didn’t stand a chance! :-) It was a beautiful moment.

You spend most of your time repeating other people’s routes, and most of your ascents come about extremely quickly after very few attempts. What about your own projects? What would happen if you invested 50 attempts into a project, instead of just 5?
Last year I made the first ascent of Perla vychodu at Moravsky Kras. Although I first thought it 9a, I later suggested 8c+. For next year I have some new lines in mind, but climbing is prohibited in the best areas due to environmental reasons. Of course, gratification from first ascents is bigger for sure and it doesn’t necessarily have to be a route at my limit. It's something that you leave there, on the rock. If I found some mega-hard project and I knew that I would need many attempts to send it, I wouldn’t try it but instead I’d wait a few years to get better and send it fast. This is what I’m doing at the moment, but when I’m older the chances of improving are smaller, then maybe I’ll work on something really hard.

What’s your typical day at the crag?
I usually climb one or two easy routes to warm up (7b/c), then when I feel strong enough for something hard I go for it. I rest a really long time between attempts on demanding stamina routes, something like 3 hours or even more. I need lot of time to recover the same power after climbing something really long. For example, before my successful ascent of La Rambla I waited 5 hours! If the route has got an easy start I warm up on it and then I’m ready for the harder sections above. The problem comes if a route is difficult right from the start. And when I climb bouldery routes I rest for just one or two hours between one attempt and the next.

And when you don’t manage to climb outdoors?
I train on small bouldering walls only. I usually train 4 or 5 times per week, maximum strength and also endurance (20-30 moves). I usually go to lead climbing walls only about twice in winter.:-) In summer I climb indoors only before competitions. And if I didn’t have competitions, in summer I wouldn’t climb there at all!

Last year you surprised us by taking your sports climbing ability into the mountains. Tell us about this experience
I started thinking about Silbergeier in spring last year, when my friend Ondra Benes (who repeated the route in 2006) recommended this route. But I didn’t really plan it, it would have been something for next year: But it was very hot in the Frankenjura, where I had initially wanted to spend most of my summer. And so Silbergeier came to mind. Multi-pitch climbing really inspired me, I'd like to return!

What about other forms of climbing such as trad?
Hmm, maybe. But I've never placed nuts and friends and I do not know if I’m skilful enough :-)

Outdoors you continue to climb incredibly. What's your view about competitions indoors?
Although they are the best way to compare climbers, I haven't really enjoyed them that much so far. I'll see, perhaps if I compete in World Cups then they might interest me more. In summer though I off to Sydney for the Youth World Championships, who knows…

Is there such a thing as the hardest route in the world?
Oh, I really do not know. But I wouldn't be surprised if for example some old 9a such as Open Air at the Schleierwasserfall (Alexander Huber, 1996) was one of the hardest.

So what's the the hardest thing in the world?
Not to climb!