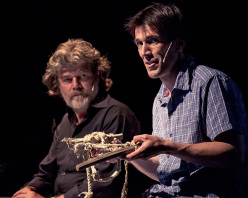 Trento Film Festival: the winners of the 63rd edition

The Genziana d'Oro - Gran Premio Città di Trento of the 63rd edition of the Trento Film Festival was awarded to director Teboho Edkins for his film Coming of Age.

Having viewed the 26 films in the running for the 63rd Trento Film Festival the jury - composed of independent docu filmmaker Kavita Bahl, of the Italian alpinist and filmmaker Hervé Barnasse mountaineer, of the founder and director of New York’s WILD Film Festival Nancy Rosenthal, of Italian film director Alessandro Rossetto and of England’s novelist and travel writer Colin Thubron -awarded the prizes.

Teboho Edkins won the most coveted gentian Genziana d’Oro – Gran Premio Città di Trento of the 63rd Trento Film Festival for the film Coming of Age. A village in the snowy mountains of Lesotho in South Africa acts as the background to this touching story of friendship between two friends. "In front of the discreet lens of the director - stated the jury - these relationships develop through a fascinating aura of absolute honesty and the harshness of the environment is evoked through highly touching scenes. A film of rare delicacy. "

Italian film director Gigi Giustiniani was awarded the Genziana d’oro of the Italian Alpine Club for the best mountaineering film. His film, which came about thanks to the support of author Raffaele Rezzonico, relives the climbing and romance of Gabriele Boccalatte and Nini Pietrasanta through extraordinary archive images and diaries. "This extraordinary recovery of an long gone era of mountaineering presents a heroine of mountaineering during a time when there were hardly any female mountaineers."

The Genziana d’Oro della Città di Bolzano for the best film about exploration and adventure went to the epic Valley Uprising by Valley Uprising di Nick Rosen, Peter Mortimer and Josh Lowell that celebrates, through extraordinary archive material and anecdotes, Yosemite’s climbing from the
early pioneers in the ‘60s to the recent extraordinary ascent by Tommy Caldwell and Kevin Jorgeson. A film that "skillfully evokes the social context in which the climbers found themselves: the hippie culture - of which they constituted a striking part - the friendships and bonds of the early utopian days, to the fractures and finally the stubborn survival of that movement. The film portrays a rich variety of different characters, highlighting the different and increasingly risky climbing techniques and the re-enactment of a lively and at times obsessive counter-culture."

The Jury Prize was awarded to DamNation by Ben Knight and Travis Rummel. This chronicles a growing movement of activists who, through spectacular actions, fight to free rivers from their dams. "A masterful piece, peremptory, lively and with contagious enthusiasm."

The Genziane d’Argento were awarded as follows: for the best short feature documentary Resuns by Swistzerlands Aline Suter and Céline Carridroit; for Best Short Film went to Houses with small windows by Bülent Öztürk.