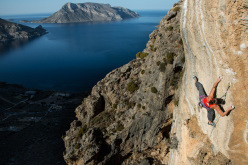 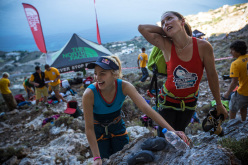 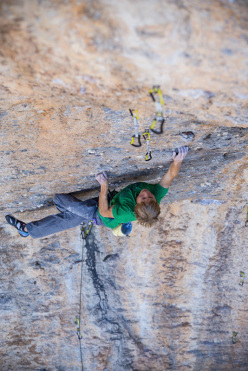 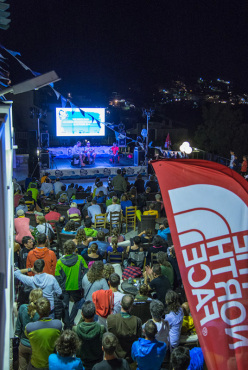 Alexander Megos and Caroline Ciavaldini have won the The North Face Kalymnos Climbing Festival 2013, the meeting that took place on the Greek island from 10 to 13 October.

he second edition of the North Face Kalymnos Climbing Festival has been hailed as a great success and more than 540 climbers from 24 countries travelled to Greece to take part in the event along with 16 of the world's strongest climbers.

Although the festival began officially last Thursday, a totally unexpected turn of events kicked the meeting off in style: just a few hours before the start of the British climber James Pearson seized the moment and proposed to Caroline Ciavaldini. This stunned and surprised all, including the bride... who promptly married Pearson with Riky Federer doing the honors beneath the Kalymnos crags that then hosted the three "competitions": the two climbing marathons, open to all, and the PROject competition reserved for 16 talented pros.

The PROject competition was won, in a brace of shakes on Thursday, by Germany's Alexander Megos who sent all four routes in a mere five attempts. Only one route, Klesa, required a second attempt. But seeing that this 8c+ had never been freed before, maybe it deserved that second go, no? Proof that Megos was "really impressive, absolutely crazy" comes from Jacopo Larcher , one of the route setters along with Hansjörg Auer, Eneko Pou and Siebe Van Hee and the fact of the matter is that Megos was truly magical on Thursday morning. Almost as magical as the atmosphere itself that was felt, palpable, amongst these top climbers. As Auer told planetmountain: "The feeling among the climbers was really relaxed, if possible even more than last year, truly beautiful!"

While it is true that the media attention and the live streaming concentrated on the PROject competition climbing action at the beautiful new crag located between Ghost Kitchen and Skalia Pillar, it would be fair to say that the 540 participants of the two climbing marathons certainly had their fair share of climbing fun. Hervé Barmasse perfectly described these passionate climbers as follows " The most interesting part of the event organized by The North Face. Ordinary people, who have come from all over the world to share the pleasure and the passion for sport climbing. It's them, the normal folk, who are the heart of this big event... to them my greatest my respect..."

To find out more, check out www.thenorthfacejournal.com/category/kalymnos