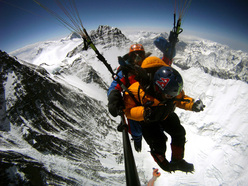 Sano Babu Sunuwar (back) and Lakpa Tsheri Sherpa (front) launch a tandem paraglider from the summit of Mount Everest, only the third group to do so. For the men, this was the highlight of the entire expedition—a dream come true to fly above the Khumbu Glacier.
Photo by © Sano Babu Sunuwar

The National Geographic Adventurer of the Year 2012 has been awarded to Mountain Guide Lakpa Tsheri Sherpa and kayaker Sano Babu Sunuwar. The two Nepalis received the award for last year's "The Ultimate Descent", their ascent of Mount Everest, paraglider flight from the summit and kayak paddle all the way from Nepal to the Bay of Bengal. A trip which took them from the 8,865m high summit down the rivers Kosi and Ganges for 850km to reach the Indian Ocean.

28-year-old Babu and 39-year-old Lakpa beat 10 other candidates thanks to an online survey which resulted in almost 72,000 votes cast on the official website of the prestigious American magazine. In 2011 the award went to Spanish alpinist Edurne Pasaban, while in 2009 the prize was awarded to American climber Dean Potter.

"We weren’t after a record, we just wanted to do all these things, climbing, paragliding, kayaking, in one continuous trip," said Lakpa. When asked about his favourite part of the trip, Babu said, "Taking off from the highest point in the world."