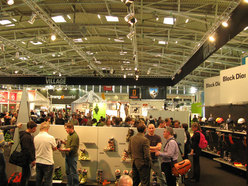 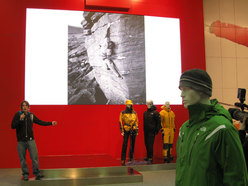 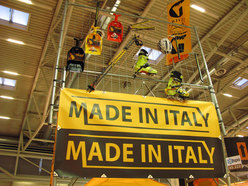 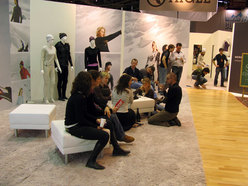 Last Wednesday the ISPO Winter 2009, the largest outdoor trade show in the world, drew to a successful end for both exhibitors and visitors. In the following article we attempt to analyse the current state of new products and the "anti-crisis" trend.

No one was missing at the Munich ISPO. So where is this crisis we asked ourselves? The answer was provided immediately by a cunning old devil of international outdoor trade fairs: the American dream is now here in Europe. In fact, while the markets in the US are in crisis (including the outdoor world), nothing seemed to have changed here in Munich. Last Sunday there were more people than we've probably seen for a long time. And this “movement” continued on the other days, as well. The number of stands even seemed to have increased. And have a quick look at the “corridors” said our wise observer: they aren't wide at all... another sign that all the spaces in the fair had been sold out. So, no crisis?

Things are more complicated than they seem explained another veteran expert... Certainly the extraordinary and providential snowfall this winter provided an enormous breath of fresh air. And certainly the storm hasn't arrived here yet, on the “old continent”. Nevertheless there was something strange in the air, a certain restlessness....that perhaps is better defined as uncertainty. many confirmed that the winter season had gone well so far. Others asked how it would continue while others still were afraid of a disaster if the snow next winter goes back into hibernation. But what struck most was that nothing seemed to have changed really. And many seemed to wait for something, still to be defined, to occur.

In fact, in this almost unreal atmosphere, the good news is that there are some new products. This proves that R&D for something new and amazing has certainly not slowed down. And it also proves that those there are companies who have the strength and desire to look forward, interpreting the wind of crisis as a synonym for change. Hoping for something better. And so, almost without wanting to, we were taken in by innovations and variations on a theme which are undoubtely signs of life and assurances for the future.

Starting with ski mountaineering boots which see the new (and futuristic) La Sportiva Stratos as a sort of exclusive Formula 1 boot for those who enjoy white powder racing with top performances strapped to their feet. Another product for top end ski mountaineering is the new, lightweight and beautiful Dynafit Dy.N.A. produced by the Oberalp/Salewa footwear division which not by chance received the ISPO Outdoor Award 2009 for its category. Val di Fiemme based La Sportiva also premiered the Speedster, its new climbing shoe: a “high performing slipper” which aspires to become one of the company's best sellers. Having said that, competition in this market niche is stiff, beginning with the Scapa range. The differences, for a while now, are to be found in the smallest details and the perfection of ideas.

It is for this reason that AKU decided to take another look at its confirmed Spider, a boot which continues to find more and more favour and which here at the ISPO was presented in a lighter and even more technical version due for next autumn. And there will also be “strong” version in leather, much appreciated by British climbers who need to confront difficult conditions such as those found high on Ben Nevis. Nothing this “rough” comes from Icebreaker's baselayer and midlayer, which provide a pleasurable sensation and are by now synonymous with the true value of Merino wool as an irreplaceable element for technical outdoor wear and natural wellness.

This change in mentality almost presupposes a life philosophy. This can be seen in Grivel's attention to simple and efficient systems. The master of Made in Italy has always produced hallmark prpducts and this time its their trekking poles which are highly desired: lightweight, with a simple, ergonomic and efficient grip. But most intersting of all is the fact that it stows away in your rucksack, easily dissemble down into three units, and quickly reassembles with a simple flick. This small magic is achieved thanks to great know-how and the careful analysis of even the smallest detail. Grivel's study to optimise icescews with an integrated quickdraw and carabiner is another example of this know-how, as is its enormous collection (in carbon fibre) of ice axes for all types of uses. Small variation, at times substantial and genial, such as the lowering system for indoor walls presented by Mammut. No screwgate, nothing else needed: the rope is placed into lowering carabiner and once inside it simply cannot exit. After being lowered to the ground you have to untie, thread the rope and the (safe) game comes to an end... this is a definitive solution to the problem of placing a rope incorrectly in a belay station.

When talking about details and stories, its worth mentioning the 120 year anniversary of C.A.M.P. Thanks to its R&D division this historic Premana based company presented a series of new products at the ISPO for the entire outdoor and mountaineering market. Their Snowshoes stuck out, and these lightweight snowshoes are not only perfect for all terrain, they are above all adjustable to enable ideal “floating” in all snow types. These are supported by the range of beautiful high performance Gloves and the Essential Down jackets which, as the name suggests, are lightweight and performance orientated. And when talking about distinctive signs and innovation, we must mention Black Diamond which presented its new, beautiful and catching range of Freestyle skis which clearly mark the companies desire to open up to new horizons. Naturally the American company has added its unmistakable style, seen clearly in its entire range of mountaineering equipment which continue to act as BD's premier business card.

Ferrino's new range of technical products spring to mind when mentioning new markets and product types. The historic Turin based company launches its new determined and high-tech range which goes hand in hand with the impressive battle horse range of tents and rucksacks to suit everyone's tastes, from trekking to the world's highest mountains. The same holds true for the American Mountain Hardwear which continues to emerge in the panorama of leading outdoor companies. At the ISPO more than 80% of its collection had been revised, with particular attention to rucksacks which amazed for the courageous styling decision which goes against mainstream tendencies.

This renewal can also be seen in all companies dedicated to technical apparel, perhaps the sector which has the most competitors and where it's hardest to differentiate and distinguish oneself. In part this is due to the fact the membranes, the hardware applied to clothing, continues to be monopolised by two great contenders, the tried and tested Gore Tex and the increasingly vocal and emerging E-vent. It's because of this that attempts to differentiate are increasingly difficult. History becomes an important factor, as does the desire to emerge and renew, such as that by the interesting Scottish company Rab. The value of a brand and above all the style count, such as Patagonia or, to mention someone absent from the ISPO (but much talked about), Montura, which in these last few years has undoubtedly become the center of attention thanks to its differences, style and content.

Returning to the crisis and the awareness that things are changing. Out attempt to provide a panorama, even if incomplete and we would like to apologise for this, should give an idea about the efforts undertaken by companies and the need for research and change which was palpable. A new awareness to attempt to improve and focus on important issues so as to take a step forward. At least, this is what one hopes. At Munich, TNF presented, apart from its usual “monster” collection, some of its testimonials. These included a Makalu base camp satellite connection with Simone Moro and Dennis Urubko and a presentation of British trad expert James Pearson. One of the North Face managers introduced the 23 year old recounting that at the start of the 2nd year James had asked for a car to drive to the crags. “Let's sit down and talk” is how they answered “so that we can explain how things work in life...” Which is how James Pearson's project "The walk of Life" began.