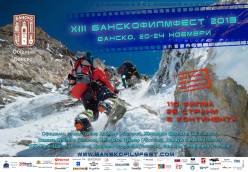 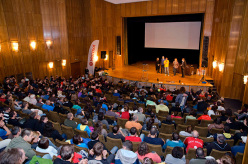 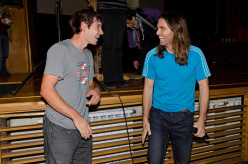 From 20 - 24 November 2013 more than 110 film from 27 countries will be screened at the Bansko Film Festival in Bulgaria. Special guests include Peter Habeler, Simone Origone, Christian Stangl, Géraldine Fassnacht, Juanito Oiarzabal and Benedikt Purner.

As of Tuesday 24 November Bansko - the beautiful Bulgarian ski centre and member of the International Alliance for Mountain Film since 2005 - will hold the 13th edition of the only international film festival in South East Europe and the Balkans dedicated to alpinism climbing, extreme sports and adventure. 27 countries will be represented and as per tradition a host of famous climbers, skiers and adventurers will be invited and join the likes of past guests such as Walter Bonatti, Reinhold Messner, Kurt Diemberger, Erhard Loretan, Krzysztof Wielicki, Alexander Huber and also Gustav Thöni.

The following guests will take part in this year's Festival: Peter Habeler - the first man to summit Mount Everest without supplementary oxygen together with Reinhold Messner. Simone Origone - speed skiing champion and speed record holder having skied at 251.40 km / h. Christian Stangl - one of the greatest "skyrunners" in the world. Géraldine Fassnacht - the talented freerider, snowboarder and first to BASE jump in Antarctic. Juanito Oiarzabal - the Spanish alpinist who needs no introducing with his (record breaking) 28 ascents of 8000m peaks and all 14 eight-thousanders without supplementary oxygen. And, last but not least, Benedikt Purner - the man who together with Albert Leichtfried forms one of the strongest European ice climbing partnerships.

Apart from the screenings of films selected for this year's edition, the program includes "Destination - Mongolia", a series of special events with guests and book presentations: " Antarctic Diaries" by Hristo Pimpirev; " Walter Bonatti. The brother who I never knew I had" by Reinhold Messner and Sandro Filippini, "Before the Oblivion" by Rumen Stoichkov; " Travelling to Livingston" by Marina Marincheva. Moreover, there are also nine exhibitions, seminars, classes, workshops, a photo contest, photo - workshops, painting exhibitions for children based on the theme "Children draw the Pirin mountains " and a special film selection for the younger audience.