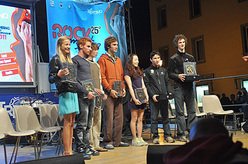 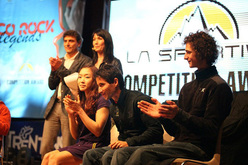 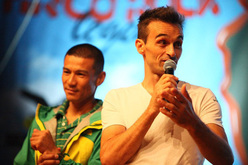 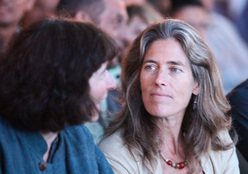 During the VI Arco Rock Legends the Salewa Rock Award was given to Adam Ondra. The La Sportiva Competition Award went to Ramon Julien Puigblanque.

There are evenings destined to leave their mark. Just like the one which took place last night at Arco and which remembered and celebrated 25 Rock Master years as well as the VI Arco Rock Legends Award. Because up on stage was not only a piece of climbing history, but also its future.

On closer inspection, the entire history of this young sport was represented in Arco last night. Beginning with Mario Morandini, the former town councillor for tourism who, back in “distant” 1986, was one of the driving forces behind the Rock Master competition along with Ennio Lattisi, Assessore allo Sport, e Sergio Calzà, Albino Marchi, Giuliano Emanuelli, Diego Finotti, Giuseppe Filippi, Angelo Seneci. No one could have imagined that that event 25 years ago could evolve into the massive Rock Master. And then into this beautiful World Championship; a point of arrival and also a new starting point.

Talking of starts… Seeing Andrea Mellano up on stage proved an emotional moment. Together with Emanuele Cassarà he was the first to believe that sport climbing could also be transported into a competition area. In 1985 in Bardonecchia these two invented SportRoccia, the first official sport climbing competition. At the time this was a great challenge, taken on a year later by Arco with its Rock Master. Those who remember that era, and also Mellano’s role in founding the Italian Sport Climbing Federation which he presided for numerous years, cannot but thank him. Mellano believed, betted and fought for this sport and he is, and will always remain, one of its founder members.

After 25 years the time had come to remember and celebrate some athletes – some of the main players at the start and during the early ’90’s era – for the fundamental role they played in developing this sport. The evening was presented as usual by Kay Rush and led Luisa Iovane, Lynn Hill, François Legrand and Yuji Hirayama as they told their personal climbing and life stories. These four climbers are legends in their own right, examples who have strengthened this sport, and on stage last night they proved this once again. They were sincere champions, happy to remember the magnificent Rock Master of the past but also capable of providing their visions of the future, with lightness and an infectious smile.

The future… which was rewarded in the form of Andrea Rojas from Ecuador and Amelia Metcalf from the USA: the two youngest athletes in this World Championship – both just turned 16 – were handed an award by 14-year-old Arco schoolgirls. And then of course the future and present was represented by the Arco Rock Legends Award, the sport climbing Oscar won by Adam Ondra, the unreachable 18-year-old from the Czech Republic. For the third time Ondra won the Salewa Rock Award, the special prize which goes to the best performance on rock, while the La Sportiva Competition Award went to the Spanish champion climber Ramon Julien Puigblanque, cheered on by the spectators and (unsurprisingly), one of the favourites for the Lead World title here in Arco.

Awards aside though, what is worth underlining is that last night the best climbers in the world were on all on the Arco Rock Legends stage: the young American star Sasha DiGiulian, the extremely strong Italian Gabriele Moroni, the French future Enzo Oddo and the king of climbing Chris Sharma, the legend who together with Ondra was in the running for the Salewa Rock Award. They were joined by the astounding Korean Jain Kim, Ondra once again and Puigblanque in the running for the La Sportiva Competition Award. In the end the Jury of 23 international magazines had to make the difficult decision… One thing is certain: all those on stage last night form an integral part of not only the greater history of sport climbing, but also and above all its great future.