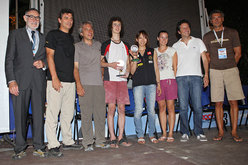 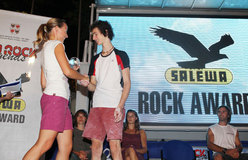 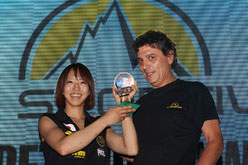 Adam Ondra for rock climbing, and Akiyo Noguchi for competitions. These are the two winners of the fifth edition of the Arco Rock Legends.

Ondra – the 17 year old who seems to have come from a different planet to upset all the current parameters of climbing and to project it into the future – received the SALEWA ROCK AWARD. While the winner of the 2009 Bouldering World Cup, the 21-year-old Akiyo Noguchi from Japan, received the LA SPORTIVA COMPETITION AWRD. The novelty this year is the Sector Climbing Award, a prize designed by the Rock Master Association for those who are true world climbing symbols. This year it went to an all-time legend, Maurizio Manolo Zanolla, the Italian climber who through his ascents and vision represents both the past and future of this great climbing passion.

It has to be said that this year the international Jury, comprised of 23 specialised magazines, had no easy task in selecting the winners of the Salewa Rock Award and the La Sportiva Competition Award. Quite rightly so, since the 5 candidates for the rock and 3 athletes for the competition award were of the highest calibre. So, as the Jury President Fabrizio Miori explained, for the first time the Jury had to do a second ballot to proclaim the two winners.

Those in the running for the Salewa Rock Award, apart from 2008 winner Adam Ondra, were Chris Sharma, the king of climbing and winner in 2009. He had been nominated along with the strongest of Frenchwomen Charlotte Durif and her young (a mere 15 years of age) and irrepressible compatriot Enzo Oddo, who despite his age has already sent climbs of the hardest difficulties on the climbing scale. Last but by no means least there was Daniel Woods, the American who had just sealed a unbelievable bouldering season. In the end though the award went to Adam Ondra for, as the Jury motivation states: “his impressive achievements and his ability to interpret climbing as one great adventure.” It was great to see the spontaneous applause of Sharma, Oddo and Durif. And the joy of “young” Oddo, incredulous to be there, together with so many champions. Chapeau to all for the positive spirit!

If deciding the Salewa Award was difficult, the La Sportiva award was no less easy, as this too needed a second ballot. Apart from Noguchi there was the 18 year old Austrian Johanna Ernst – read Lead World Champion and World Cup winner 2009. And Adam Ondra once again, who in his debut year in 2009 won the Lead World Cup, the Combined and silver in the World Championship. But the competition award, as explained by the Jury motivation, went to “Akiyo Noguchi, for her victories and her positive competition spirit.” Judging by the amazement and smile on Noguchi’s face, one has to say that the choice was perfect for this champion of bouldering and style..