The sharp end by Peter Mortimer and Nicholas Rosen
Photo by Planetmountain.com 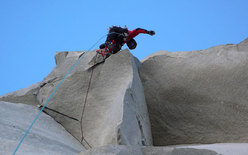 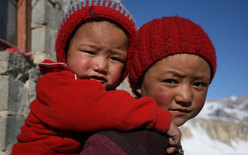 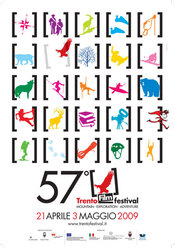 The 57th Trento FilmFestival, the oldest film festival dedicated to mountains, exploration and adventure takes place in Trento from 21 April to 3 May. The films, evenings, main players and meetings and some thoughts about the pre-Festival...

How many souls do the mountains have? Certainly as many as the men and women who live in them, who cross them and love them. There are many visions therefore. And many of these will certainly be unveiled during the 57th edition of the TrentoFilmfestival which promises it usual rich calendar of films, events and evening talks dedicated to mountaineering, as well as meetings with film directors, writers, mountaineers and all that which is connected to the "culture" and life of the mountains.

The Festival begins today, on 21 April with the traditional MontagnaLibri international book fair with encompasses practically all mountain books. As usual this anticipates the Film Festival proper, which commences on 25 April with the evening dedicated to "Blind Husbands", the beautiful mute film by Erich von Stroheim orchestrated live by the Trento Philharmonic Orchestra. Those who have watched these performances unfold over time know that this will be a unique event, not to be missed, that unites great cinema with great music. But let's take things one step at a time, because there are plenty of occasions to watch other great events live.

THE FILMS OF THE 57TH EDITION
As usual Trento begins with cinema, the historic standard bearer of the entire Festival. Having mentioned the absolutely interestingly evening on 25 April dedicated to Blind Husband and the Trento Philharmonic Orchestra, of the 43 films admitted for the competition Before tomorrow by Madeline Piujuq Ivalu and Marie Helene Cousineau is noteworthy. This film has already been presented at the Sundance Filmfestival and (splendidly) recounts the life and difficulties of the Inuit people. This theme, that of the difficulties of small mountain communities and their wild lands, reappears in other films such as Dolma du bout du monde by Anne, Erik, Veronique Lapied, Alicia en el paìs del cileno Esteban Larrain, Himalaya terre des femmes by Marianne Chaud and Cheyenne, trent'anni by Michele Trentini. Karl, the moving film by Valeria Allievi dedicated to Karl Unterkircher who died on Nanga Parbat last year is worth mentioning in the section alpinism and action, as is La voie Terray which Gilles Chappaz dedicated to the great French mountaineer Lionel Terray. Oltre la parete by Elio Orlandi recounts, via a series of splendid images, the rock faces of Torres del Paine (Patagonia) but above all the human side of the climb he experienced with this climbing companions. Obvioulsy "expedition" films are high on the agenda, such as Expedition Manaslu by Carsten Maaz and Lightning strike Arwa Tower by Christine Kopp, Christoph Frutiger and Stephan Siegrist which retraces the ascents of two different teams climbing on the splendid Arwa Tower (Garhwal, Himalaya). The exceptional "actors" are, starting with the narrator (Stephan Siegrist himself) and continuing via Thomas Senf, Denis Burdet, Anita Kolar and Ines Papert, one of the best ice climbers and mountaineers of the new generations. Rock climbing is well represented by Claire Macleod's Training Day which recounts Dave McLeod's passion and training which result in his Echo Wall on Ben Nevis, a top route route by one of the strongest trad climbers in the world. Another film not to be missed for all those who love the genre hard rock is The sharpen end by Peter Mortimer and Nicholas Rosen: the exceptional cast features Dean Potter, Steph Davis, Tommy Caldwell, Matt Segal, Lisa Rands, Topher Donahue, Adam Ondra and the spectacle is heart-stopping. Others worth mentioning in the Alp&Ism section are Berhault by Gilles Chappaz and Raphaël Lassablière dedicated to the great French climber and mountaineer Patrick, SS26 by Valerio Folco which features Alberto Gnerro and his research for the hardest climbing difficulties, Aria by Davide Carrari which documents Pietro Dal Prà and Lorenzo Nadali and their vertical Sardinia. last but not least, those in search of "free spirit + craziness", i.e. base jumping, snowboarding and freeriding, shouldn't miss Ten a cameraman's tale by Guido Perrini, Try again by Alessandro Miniotti and 20 seconds of joy by Jens Hoffmann. All that is left to say is mention the film events, those which shouldn't be missed. There are 21 of these. We'd like to mention Ritratti - Mario Rigoni Stern by Carlo Mazzacurati, L'Agnese va a morire by Giuliano Montaldo (this year's Jury President), Il tempo si è fermato by Ermanno Olmi, Oceano dentro by Juliane Biasi and Sergio Damiani and In tempo ma rubato by Marco Paolini. Naturally, there will also be the film dedicated to Riccardo Cassin and his 100 years, and the Guardia Di Finanaza Expedition to the Miyar Valley.

EVENING TALKS: FROM SHARMA TO VALLE DEL SARCA VIA THE CERRO TORRE
Great climbers and mountaineers have always taken stage in the Auditorium Santa Chiara and once again the "tune" remains the same. On Wednesday 29 April Trento will host Californian climber Chris Sharma, one of the legends of this last decade who, perhaps more so than anyone else, has made climbers dream worldwide. Sharma on stage will be a unique event, not only in Italy and there is much curiosity for what Chris "The King" will have to say. There is certainly no less anticipation for Sarca (R)evolution and the evening dedicated to the climbing revolution instigated by absolute protagonists such as Manolo, Heinz Mariacher, Luisa Iovane and the unforgettable Roberto Bassi on the rock faces in the Valle del Sarca. This began at the start of the 1980's when those four rock vagabonds "invented" the new game of climbing... this is a great story which had a concrete beginning and still continues even today, since apart from Manolo, Mariacher and Iovane it has had many other main players. The "inventors" and the other main players will be at Santa Chiara to retrace the past with the help of Kay Rush - a habitué of the Festival - who will also host the evening with Chris Sharma. It's practically superfluous to underline that the third evening, on 30 April, is highly anticipated too. It couldn't be otherwise seeing that the protagonist is Cerro Torre, alias the scream of stone. For mountaineers of all latitudes and era this mountain represents the essence of a legend. Perhaps this mountain, more so than any other, has marked the history of Italian mountaineering and in particular that of mountaineers in the Trentino and Lecco regions of Italy. "What interests us is tracing the human story which has developed around the Tower, intertwining it with the history of those years which start after the Second World War and lead right up to present day" explained Maurizio Nichetti, the art director of the FilmFestival. He added: "This story is also a story of Italian emigration to Argentina, of technological revolutions, of environmental battles, of confrontation between generations which since time began, in all fields, have been rightly carried out and amply discussed." The Festival therefore, 50 years after the ultra-discussed first ascent by Maestri and Egger of the Torre, has decided to steer clear of the polemics and the technical details of the climbs and has instead opted to bring to the forefront the great and passionate human stories which succeeded each other in the folds of these extraordinary rock faces. This is a path, one must add, which unites all those who dedicated great part of their lives and their dreams to the myth and arid and contradictory beauty of one of the most beautiful mountains in the world. The evening is entitled "The scream of paper"... and we hope it will provoke some smiles to push aside that gloominess which at times assails (even) mountaineering and its protagonists.