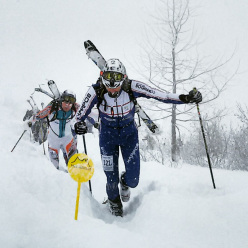 During the Tris Rotondo ski mountaineering competition in Canton Ticino, Switzerland on 28/02/2016.
Photo by Lorenzo Scandroglio 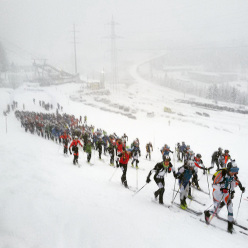 Tris Rotondo: the start of Super Tris in Canton Ticino, Switzerland on 28/02/2016.
Photo by Lorenzo Scandroglio

The seventh edition of the classic ski mountaineering competition for teams of two or three took place in a driving snowstorm and coincided precisely with the biggest snow forecast. Not to be put off, the Italians Filippo Barazzuol & Nadir Maguet and the Swiss-French duo Jennifer Fiechter French & Lorna Bonnel won the Super Tris, the long version of the competition boasting over 3000 meters of elevation gain.

The task at hand was daunting yet the organization managed to oversee and pull off the entire event, despite the adverse weather conditions and high risk of avalanches. The athletes competed safely along the route tracked for emergencies and gave rise to a spectacular competition that included the likes of multiple Mezzalama Trophy champion Jean Pellissier. This is Barazzuol’s second victory in a row at the Tris Rotondo, after his first win in 2014. “Third time lucky” is what the Italian stated jokingly as he crossed the finishing line, setting his sights towards 2018 in this Italian-speaking part of southern Switzerland.

Thanks to Pic2Go, the automatic photo tagging and sharing system, the athletes can see photos of themselves taking part in this memorable snowy edition.