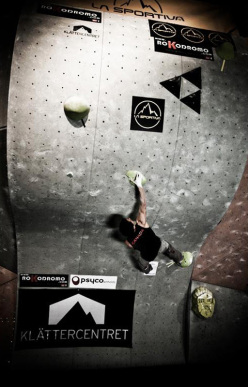 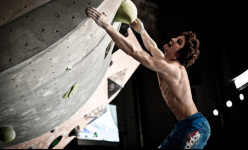 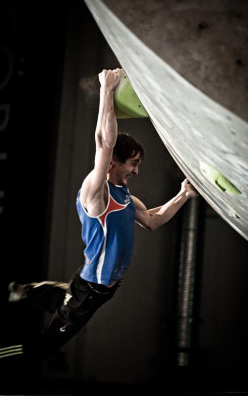 The second edition of the La Sportiva's Legends Only boulder competition reached his climax on Saturday night, when the five competitors battled through the five boulder problems during a spectacular event hosted by northern Europe's top climbing facility: the Klättercentret in Telefonplan, Stockholm.

The problems set by a team guided by British elite climber Shauna Coxsey supremely tested the skills of Dmitry Sharafutdinov, Adam Ondra, Jakob Schubert, Guillaume Glairon Mondet and winner Sean McColl, on problems estimated in the region of 8A - 8B of the Fontainebleau grading system. The five problems involved a variety of moves from spectacular twists between two-finger pockets to double dynos and extremely technical movements during which the athletes faced away from the wall.

After the first two boulders, Sean McColl and Adam Ondra held a clear lead with two flashes. However, the campus moves of the third problem proved too much for the Czech wonderkid but allowed reigning World Champion Dmitry Sharafutdinov to place provisional second. On the following problem the Russian athlete was the only one to stick a superhuman compression move from a dyno, but fell unexpectedly a few holds from the top.

For the last problem, the athletes climbed reversing the leaderboard order, which left the outcome of the event uncertain until the very last climber. Guillaume, first out, managed to top the extremely difficult boulder, but Jakob Schubert and Adam Ondra failed. Dima Sharafutdinov for his part succeeded, even managing to flash it using his own beta with which he matched hands on the crux hold. Sean McColl , if he wanted to win, was now forced to top the boulder in not more than two attempts.

Despite the circumstances and a first failed attempt, Sean calmly managed to climb up the black holds to the top, winning the event and ending his year of competitions on a high after the somewhat disappointing performance in the last Lead World Cup event in Kranj, where he lost this season's battle for third to Jakob Schubert.

We approached Sean straight after his last climb

Sean, congratulations! Does the joy of winning make up for the physical strain these boulders seemed to have put you all under?
Yes, although I'm really exhausted now, my shoulders were so sore! I had a really long rest before the fifth problem, as I was the last to climb. I think it helped but even then I had a really hard time getting my foot on one of the holds because during practice we always had an extra jug to help. So it was a bit strange just now, but I managed to pull it off!

How different it is to climb boulders that you were allowed to try for some time the day before? Some might say it would make things pretty obvious, but Jakob told me of how he couldn't send things he breezed through in practice and, conversely, how he managed to top boulders that eluded him in the work session...
Speaking for myself, I had never done the long jump on the last problem during practice, but I managed to today. Other moves like the jump on number four I couldn't do in practice and that didn't change during the competition. All in all the practice just makes it so that the setters can make not only harder problems, much harder, but more obscure ones too. Because when we were working the problems they can say "we wanted you to try it this way" which we then try. And even those suggestions can make certain things a little bit harder and certain easier in some cases. In a World Cup event, I think I'd top none of these, maybe the first one, but it's so hard to do such a weird slab in five minutes. It took us easily 45 minutes of working the problem during practice for one of us to even top. Some of the jumps took us 20 or 30 tries to just stick that one move. But it's a very unique style of competition for this event, and it's a lot of fun.

Indeed, Guillaume Glairon Mondet definitely seemed to be having a lot of fun during his first participation Legends Only, so we stopped by for a chat

Guillaume, how was this competition for you?
For me it was a great, great show. I was really happy to climb and work on the problems with so many stars of climbing, it was a really cool weekend!

You were always the first to climb, which meant you were the first to almost show the boulder to the crowd, which you often did providing some great entertainment. How did you enjoy this aspect of the competition?
It's good to play with the crowd when you are first. If you climb well, it's perfect, the crowd will respond well and the other climbers will be under pressure. I enjoyed my position and it's definitely fun to play with the crowd while climbing at your best.

What about the fourth problem, the one that nobody managed to top?
Yesterday I managed to do the move before the big sloper, before the jump, and I could do it today too. I maybe did the next dynamic movement a few times in a row during practice, but today... it just didn't work!

Was there anything else that felt easier during practice but that you could not do today (or vice versa?)
Today I couldn't do the third one, the pink one, I am not so happy about it. I was the first to pull the campus move on it yesterday, but today it was different. Also the first one was easy, in a way, but it took me three tries today. You just can't make plans for a competition!

After the successful first edition, La Sportiva and the Klättercentret organisers managed to prepare another fantastic event to allow some of the world best boulder climbers to perform at their very best. This said, it was incredible to witness the level of selfless collaboration between the athletes, not only during the working session but also during the breaks between the five boulders during the actual challenge. The five boys kept exchanging beta and ideas with each other, together with praise and encouragement. Despite their young age, they've all shown a great level of sportsmanship and ethics which further testifies the significance of competition climbing and the maturity of his athletes. Before leaving, we caught up with Shauna Coxsey, the chief routesetter and third in this year's Boulder World Cup.

How was it to see the boulders climbed in what could be the moment of truth for the routesetters?
I was actually really nervous to see the boulders being climbed but I think it went really well. It was a bit surprising to see the first one to have so many falls, but it was nevertheless cool to watch the competition take place. I'm pretty sure it was also very entertaining for the crowd, which is what we wanted to get, so that was good.

Did you feel slightly guilty when some boulders proved particularly difficult?
Maybe, with the fourth one, it was the boulder I set up entirely by myself. I am very happy that Dmitry held the jump, Jakob was very close too. It would have been nice to have someone top it, but I think it showed how hard this one and the other boulders were.