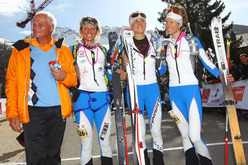 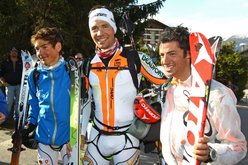 Patrouille des Glaciers 2012, the winners and the shortened competition

Lorenzo Scandroglio recounts the 2012 edition of Patrouille des Glaciers, the legendary ski mountaineering competition from Zermatt to Verbier which due to dangerous conditions was stopped short at Arolla.

A "PDG split in half", just like the count in Calvino's Il visconte dimezzato, is the title which summarises the events of the classic Swiss ski mountaineering competition which took place last week. The real deal in the jungle of formulas, categories and race options, the top gun of world ski mountaineering which from Zermatt leads to Verbier via Arolla was stopped in the latter ski resort, half-way through the race, due to an avalanche which had swept onto the race course (around 04:30) immediately after Col de Riedmatten and shortly before the arrival of the competitors. Naturally the official version of the Swiss military talked about "interruption due to unstable snow conditions which rendered the race impossible" but those who were in the running new about what had happened well before the official version. The final results were based of the positions at Arolla, but it's clear that the podium of this PDG won't be remembered like all the rest, regardless of what the official press releases state.

It's clear that the mountains don't allow things to be programmed far in advance. At high altitude you often need to change and adapt on the spur of the moment, otherwise you need to give up ski mountaineering altogether and play some other form of indoor sport... But this time it was clear right from the outset that conditions weren't particularly suitable for a regular competition. But how would the organisation have dealt with all the reimbursements which would have come from all over the place, at 1200 Swiss francs per team.